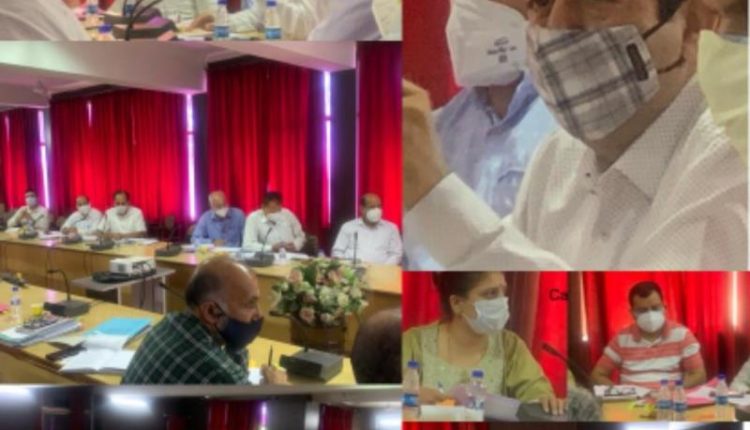 JAMMU : Director School Education Jammu Dr. Ravi Shankar Sharma, today, chaired a review meeting which was attended by all the Joint Directors of Jammu Division( DSEJ), Personnel Officer, Deputy Director planning, Chief Accounts Officer, all the 10 Chief Education Officers of Jammu Division and other officials of the Directorate of School Education Jammu to discuss various pressing issues related to online classes, ICT Laboratories in schools, scholarship for students, basic amenities such as drinking water and toilets for students in schools, ATD of teachers 2021, SRO-43 cases, vacancy and seniority position of various cadres and other such related issues.
The Director School Education Jammu, held a threadbare discussion about the status of complaints pending with crime branch/ ACB and the status of online as well as offline grievances reported.
The status of all pending legal cases in the courts was also reviewed alongwith settlement of Audit Paras, advance drawl in respect of office of AG and State Audit and Inspection Department.
He directed the CEOs to monitor the ongoing works being executed under various government schemes either by on-site visits or through virtual tours to ensure that the quality of work doesn’t suffer and projects are completed in a time bound manner without any delays.
They were further directed to submit the latest status about the functioning ICT Labs and Computer Aided Learning (CAL) centres . In addition to this, the CEOs were asked to issue instructions to teachers regarding usage of ICT/ CAL Labs for delivering online classes.
The importance of accuracy in entering data on UDISE PLUS and Adarshshila was emphasized considering the significance it assumes in light of the fact that this data serves as the basis for impactful planning and effective decision making at all levels.
He directed all the Chief Education Officers to ensure that students are reached through online classes, community classes, radio classes and TV classes so that there is no further loss of studies during these pandemic times. As the schools are closed, the opportunity can be used for facelifting the school buildings, taking into account the suggested colour scheme and other guidelines already issued, he added.
He stressed on the fact that government schools have better infrastructure and staff as compared to most of the private schools which should ensure a successful enrollment drive and maximum out of school children should be brought under the umbrella of Government schools.
He further directed the Chief Education Officers to ensure that the available funds are used judicially, without letting any amount to lapse. The CEOs were asked to coordinate with the engineering wing while keeping track of all the ongoing works under various schemes viz Capex works, Samagra works etc. He took a serious note of non utilization of Samagra funds released by DSEJ.
Reviewing the SRO-43 cases, he instructed the concerned sections to expedite the process as such cases need to be looked at through the prism of humanitarian grounds. A similar approach needs to be applied for time bound promotion cases.
The CEOs were also directed to achieve the set targets for various scholarship schemes of the Social Welfare Department.
Summing up, Director School Education Jammu, Dr. Ravi Shankar Sharma asked everyone to work diligently and meticulously so that there is maximum utilization of resources and the students get to reap the benefits of various government schemes.