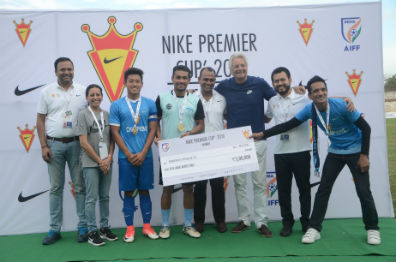 Goa,: The third edition of the Nike Premier Cup concluded at Bambolim Athletic Stadium in Goa with Minerva Punjab FC lifting the trophy with a score line of 4 – 0 against DSK Shivajians today. Held in association with the All India Football Federation (AIFF), Nike Premier Cup provides young Indianfootballers the opportunity to competewith the best athletes in their age group.

This year, 78 teams across the country competed in the U15 Youth league to earn a spot in the Nike Premier Cup. Held between January 29 – February 8 in Goa, the 16 best teams battled it out to secure winning positions in this one of a kind tournament. The semi-finals witnessed DSK Shivajians, Minerva Punjab Football Club, Bengaluru Football Club and Aizwal Football Club aggressively competing against each other to grab the final two spots at the tournament.

The finals of the Nike Premier Cup witnessed high-octane action as the two best teams in the tournament competed fiercely to lift the prestigious trophy. The winning team, Minerva Punjab FC was awarded a cash prize of INR 5 lakhs and the runners up; DSK Shivajians received a cash prize of INR 1.5 lakhs. Thoi Singh from Reliance Foundation Young Champs was awarded for being the highest scorer of the tournament.

We will not let Government shut any school in Delhi: NISA