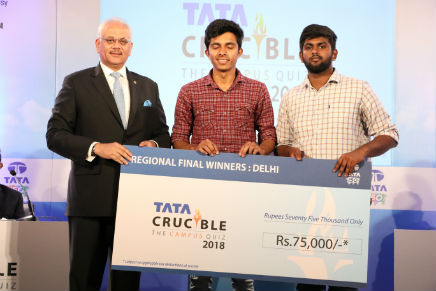 Vipraw Srivastava and Sushant Adlakha from National Institute of Technology (NIT) Kurukshetra along with Rajenki Das and Soham Banerjee from Thapar Institute of Engineering & Technology, Patiala were the top two teams at the Zone 1 finals of Tata Crucible Campus Quiz 2018, held in Delhi. They will now compete with the other four zones at the National finals to be held in Mumbai.

A total of 84 teams battled it out in the city level finale for the top honours, held at Vivanta by Taj. Hari and Ashik took home a cash prize of Rs. 75,000* and will compete in the zonal round to qualify for the national finale. Bramhdeep Singh Jakhar and Ankit from Delhi Technological University were declared runners-up, winning a cash prize of Rs. 35,000*. Mr. Rohit Khosla, Senior Vice President – Operations, The Indian Hotels Company Limited (IHCL) was the Chief Guest at the finale.

DDC Doda listens to locals regarding alignment near Thathri…

This year, the theme of the quiz revolves around 150 years of business to mark the 150th year of the Tata group. In keeping with tradition, renowned quizmaster ‘Pickbrain’ Giri Balasubramaniam hosted the quiz in his masterful, inimitable style of presenting clever questions with equal humour.

The fourteenth edition of India’s biggest campus quiz will run for a little over two months, traversing 38 cities, with five zonal rounds leading to the grand national finale in Mumbai. The winners of the National Finals will receive a Grand Prize of Rs. 5,00,000/-* along with the coveted Tata Crucible trophy.

Fastrack and Tata Motors are supporting the prizes for the competition.