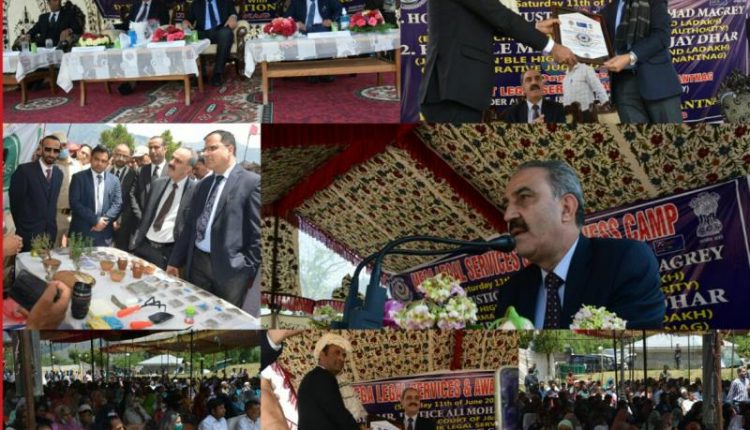 On reaching Anantnag, the duo was presented Guard of Honour at District Court Complex, Anantnag.

While briefing the press, they said that the e-Filing Help Desk will help in speedy filing and disposal of court cases and litigations could be filed from any place round the clock, adding that e-Filing system enables electronic filing of legal papers. Using e-filing, cases (both civil and criminal) can be filed before the High Courts and District Courts that have adopted e-Filing systems.

They further said that introduction of e-Filing is aimed at promoting paperless filing and saving time and cost by adopting technological solutions to file cases before courts in J&K.

After inaugurating the Mega Legal Services Camp at Kokernag, the duo inspected the stalls installed by various departments including Agriculture, Horticulture, Fisheries, Handloom & Handicrafts, Social Welfare, Revenue, Forest, ICDS, and received the feedback from the officers with regard to the implementation of various centrally sponsored schemes.

On the occasion, the duo distributed category certificates, hearing and prosthetic aids and Tiller Keys among the beneficiaries.

RDD develops playfield at an area of 62 kanals at Aadigen,…

He further said that need of the hour is to do door to door survey for better implementation of various centrally sponsored schemes, adding that J&K Legal Services has been playing a vital role to ensure optimum implementation of all the schemes and Public Service Guarantee Act, besides J&K Legal Services Authority is aimed to create legal awareness among all sections of the society including tribal and specially abled people.

He stressed upon greater coordination between the general public and administration for better implementation of the schemes and redressal of the disputes, adding that small disputes should be resolved outside the courts.

Justice Sanjay Dhar, speaking on the occasion said that access to justice is a right of every citizen as per the Constitution of India and Justice should be delivered in time. He added that Judges have role not only within four walls of courts but have to be in neck to neck with administration and general public in delivering justice through Legal Services Authorities, adding that J&K Legal services authority is one of the best in the country in terms of organising lok adalats and quick deliverance of justice.

Deputy Commissioner Anantnag, Dr Piyush Singla on the occasion said that judiciary has an indispensable role in the new era of development ensuring accountability and deliverance of services under Public Service Guarantee Act.

Earlier, District & Sessions Judge Anantnag, Naseer Ahmad Dar welcomed the guests and, Sub Judge Anantnag, Mir Wajahat presented the vote of thanks. He thanked various departments including R&B, MC Kokernag and other stakeholders for their sincere cooperation in making this programme a success.

The programme was organised by DLSA Anantnag in collaboration with District Administration Anantnag.