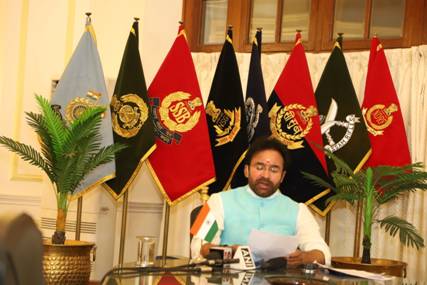 New Delhi: The e-POP (Passing out Parade) Ceremony of 51st batch of the Directly Appointed Gazetted Officers (DAGOs) of the Central Reserve Police Force (CRPF) was held in New Delhi today. The online event was conducted through video conferencing after completion of basic training of 42 trainee officers, while strictly following the norms of social distancing prescribed to fight COVID-19. CRPF Director General, Shri A.P. Maheshwari read out the message of the Union Minister for Home Affairs, Shri Amit Shah in the VC.

In his message, the Home Minister told the trainee officers that “I believe that after your training you have achieved a certain level of maturity to efficiently deal with the numerous challenges in completing operational tasks and discharging your duties”.

Appreciating the CRPF’s immense contribution to the security of the country, Shri Shah described the Force as the backbone of the country’s internal security. He paid tribute to more than 2200 brave martyrs of CRPF, who have made the supreme sacrifice of their lives, while protecting the country. The Home Minister told the trainee officers, “I am confident that the newly appointed officers passing out today will infuse new energy into the CRPF. I would expect that you will provide effective and efficient leadership to the soldiers under your command, by leading from the front”.

Inspiring the trainee officers to consider service of the Nation as their prime duty, Shri Shah said, “I am confident that you will perform your duties with full honesty and devotion, and will be successful in establishing aclean image of yourself. You will enrich the glorious traditions of the Force by devoting yourself to maintain the integrity, unity and sovereignty of the country, as per the fame and glory of this Force”.

Finally, congratulating the trainee officers, their families and the entire Force, the Home Minister said, “I am confident that you will make your supreme contribution to the internal security of the country as well as nation building”.

While addressing the event through video conferencing, MoS (Home Affairs) Shri G. Kishan Reddy congratulated the DAGOs on their successful completion of training and said that we as a Nation pay tribute to the 2200 CRPF personnel who sacrificed their lives for the security and maintaining unity and integrity of the Nation.

MoS further said that this training will boost the morale of the officers manifold and they will be able to provide perfect command to the force. CRPF is contributing its best in our fight against COVID-19 pandemic by providing its services to the Nation.

Shri Reddy said that CRPF personnel have always won the faith and confidence of the people wherever they have been deployed. He added that the Force has played a significant role right from the days of unification of the country to successfully tackling Naxalite insurgency, separatism in the North east and terrorism Punjab and J&K.

MoS also appreciated the CRPF for using new technologies and modern techniques for imparting training to these officers, which will make them thorough professionals and capable of tackling any challenge in service.

As many as 42 trainee officers including 5 post-graduates and as many as 21 engineering graduates, 2 doctors and 2 Law graduates passed out from the academy today, after undergoing a rigorous training regimen of one year. Awards and trophies were also presented to the trainee officers on the occasion.

Cambly to host IELTS classes for free during COVID-19 lockdown