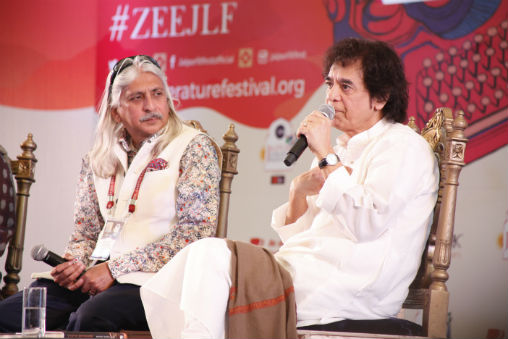 The eleventh edition of the ZEE Jaipur Literature Festival opened this morning with invigorating music by performers from Gujrat, Assam and Rajasthan – the atmosphere was heady and energetic; as crowds thronged to the beat of ceremonial drums, music and dancing. Rajasthani performers wove their way through packed audiences as Festival Producer Sanjoy K. Roy welcomed the extensive gathering of Ambassadors, dignitaries, authors and readers from across the world, brought together by a love of literature.

The keynote session by Pico Iyer had thousands of people standing at the Bank of Baroda Front Lawns. The award winning writer stated, “In the 19th century, the centre of literature was London; in the 20th century it was New York; and there is no doubt that the global capital of 21st-century writing is Mumbai. The single most important state of all is the one we have the most control over: the state of our imagination. We can’t erase nationalists and terrorists, but our words, ideas and rigorous imaginings can take us past simplicity, and remind us that ultimately, we change the world by changing how we think. Literature is more essential than ever, because imagination is no respecter of boundaries – we speak over, under and around the wall.”

Bank of Baroda Front Lawns found Philip Norman and Ajoy Bose in conversation over the Magical Mystery Tour: The Beatles in India. While, “Each of the Beatles was like Louis XIV” for Philip Norman, Ajoy Bose said, “I fell in love with the Beatles as a teen rebel in Kolkata”. There was intrepid undercover investigative journalist Suki Kim in conversation with Michael Breen in Undercover in North Korea: Facts and Fictions. Suki revealed, “Fear that is instilled by the state where the constant message is “we are at the brink of war”. In A Life In Music, tabla maestro Zakir Hussain spoke of his dedication and love for the instrument along with his experiences and memories of working with a host of legendary musicians and shared, “As soon as you touch an instrument, its spirit stays with you.” Legendary BAFTA awardee playwright Tom Stoppard was in conversation with Sanjna Kapoor where Stoppard was disarmingly charming and internet sensation instapoet Rupi Kaur in milk and honey lived up to her fame.

Coz & Kings Charbagh saw Rajasthan focused session The Afterlife of James Todd’s Rajasthan with Giles Tillotson, Norbert Peabodyand Rima Hooja in conversation with Mrinalini Venkateswaran. While Vishal Bhardwaj launched India’s Heritage of Gharana Music: Pandits of Gwalior by Meeta Pandit, there was the Nobel laureate Muhammad Yunus who caught the attention of one and all when he discussed the three zeros: zero poverty, zero unemployment and zero net carbon emissions in The Three Zeros.

In A World Turned Upside Down: India in the 18th century, where art historian B.N Goswamy and Harvard professor Maya Jasanoff were in conversation with William Dalrymple, he said, “The festival this time around is happening under the shadow of Bollywood.” In the session Ghatotkacha: Master of Illusions, a book by Namita Gokhale, Ujan Dutta the illustrator of the book was found stating, “My lack of knowledge on Indian epics pushed me to pursue fantasy art. Wanting to know more is so important.”

Scouring the edge of reason for answers were sessions like the book launch of Padmini: The Spirited Queen of Chittor by Mridula Behari and sessions like Banned in India with Mridula Garg. Amity University Baithak had a more jovial ambience where poet Sampat Saral indulged in satirical verses in Hasso, Hasso, Phir Hasso and also was launched Chhote Haath Badi Baat published by Bal Bhavan Jaipur featuring an anthology of literary and artistic works created by young children from diverse educational and socio-economic backgrounds throughout the various workshops and celebrations organised by Bal Bhavan Jaipur over the past year.

The majestic Durbar Hall hosted Indian Women Mystics: From the Rishikas to the Bhakti Poets featuring Arundhathi Subramaniamand Atmaprajnananda Saraswati who was found stating, “Vedas are source book for all discipline and that Vedas are source book for all discipline”, in conversation with Philip A. Lutgendorf and also intriguing sessions focused on minorities such as Shalom: Indian Jewish Fiction with Esther David who stated, “Take the Indian Jew anywhere, but you cannot take India out of the Indian Jew.” There was also a very fascinating session Interrogating the Margins featuring Dalit writer Manoranjan Byapari.

AU Bank Samvad resonated with poetry and myriad voices in Poetry Hour 7×7: Kavita Nirantar with a posse of poets such as Adriana Lisoba, Arundhathi Subramaniam, Era Tak. The effervescent and feisty Mira Nair held the stage with The Personal and the Political.

The day ended on an invigorating note and reinforced the role of culture which facilitates not just knowledge but the ability to dissent.

Over the next five days, tens of thousands people will gather daily at the world’s largest literary festival, to mingle with prizewinners, particle physicists, Rajasthani and Instagram poets, novelists and economists. This year’s festival will explore a multitude of ideas and themes, including Translations, Poetry, Women and the Environment.