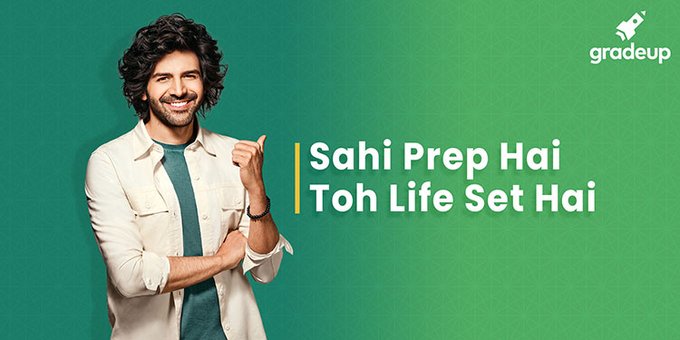 Conceptualized by Mirchi Brewery and directed by VibhuPuri, Gradeup plans to launch a series of five brand films across all digital platforms and social media channels. Three films are being launched now with this campaign, and the other two will be released in the coming months. The brand films focus on enabling opportunities for students preparing for various competitive exams and establish Gradeup as a preferred platform for exam preparation. “As Indians, we understand that most of us need a good job or a degree to get settled in life. The campaign leverages this insight in a simple yet effective way fortifying the importance of the right preparation strategy with ‘Sahi Prep Hai, Toh Life Set Hai’. With this campaign, we aim to make students more confident in their preparation journey with us.” said Ankit Gautam, AVP Marketing at Gradeup.

The brand films focus on how every student has a unique way of studying and yet he or she is uncertain if their preferred method is the right one. The first Brand Film is around Rohan ‘Data’ Shankar, a boy who is from a small town of West Bengal and claims to be an expert in making the perfect study plan for his exam preparation but when asked if this will help him clear the exam, he is not very confident. The campaign then delivers the message that students should not spend their precious time devising multiple study plans, rather use Gradeup, that has a very well structured and adequate plan for live classes, mock tests and revision to help you do your best.

Another Brand Film features Aarti Jasoos, which is around a girl from Dehradun who has found the right preparation strategy by combining various sections of videos by multiple educators. She thinks her forte is finding the right teacher for the right topic and right content type, however eventually this strategy also takes up a lot of crucial preparation time leaving Aarti underconfident. The film then talks about how Gradeup has expert faculty, and one doesn’t need to scan the complex universe of online tutoring.

The protagonist of the 3rd film is Mr. Ph.D. from Lucknow, who has collected a lot more than the required study material and practice tests from various websites, discussion groups, and channels. Even with all this, he is still not sure if he would be able to do well in the exam. The film then projects Gradeup as the one-stop solution for all in-depth and well-designed study and practice material.

Gradeup’s live courses with a daily study plan, expert faculty, and best practice and study material help aspirants with end-to-end preparation. Since its inception in 2015, the platform has gained over 3 Crore registered users with 35 Lakh monthly active users and helps students preparing for various exams like GATE, UPSC, CAT & MBA, NET, LAW – CLAT, Defence – NDA and CDS, JEE, NEET, Bank & Insurance, SSC and Railways, BBA & Hotel Management, Teaching, AE & JE Exams, State PCS. It has raised $10 Million from Times Internet in 2019 and is looking forward to raising the next round this year. The startup is also eyeing 5 Crore users by the end of 2021.