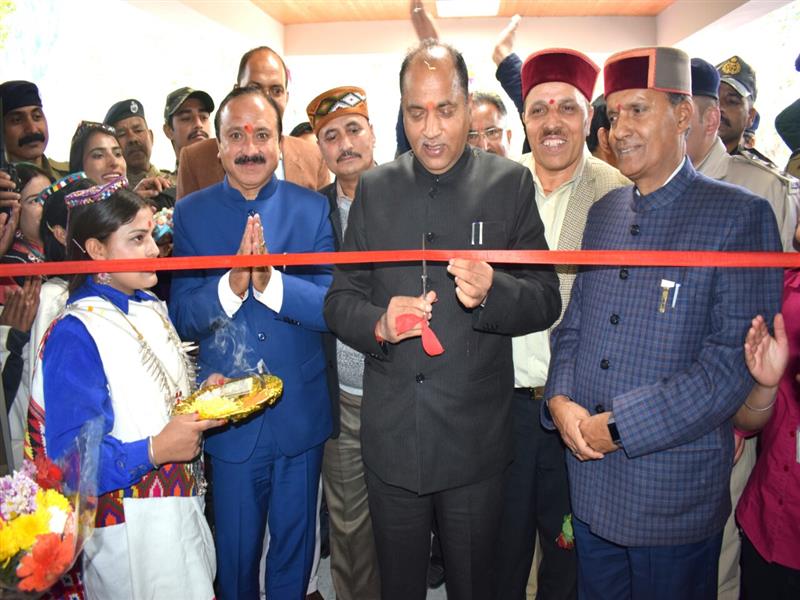 Report by Vijyender Sharma, Shimla: The State Government is committed to make Himachal Pradesh an ‘Education Hub’ of the country for which special focus is being laid on strengthening the educational infrastructure, particularly in rural areas. This was stated by the Chief Minister Jai Ram Thakur after dedicating new college building of government degree college at Killar in Pangi valley of Chamba district today. The building has been constructed by spending Rs. 4.60 crore.

The Chief Minister said that the foundation stone of this building was laid by the then BJP government in October, 2008 and it took about ten years to complete this building. He said that the State Government was ensuring that the infrastructure in the educational as well as health institutions was completed in the stipulated time period.

Jai Ram Thakur said that this college would prove to be a boon to the endeavours of the state government for women empowerment by providing them quality education. He said that out of the total 270 students studying in the college, 170 were girls. The state government would provide all possible help to strengthen the infrastructure in this college by fully equipping it with man and machinery. He said that it was heartening to know that the students of this college were excelling in education as well as extracurricular activities and competing with the students studying in college situated in urban areas.

The Chief Minister said that the state government was working with new zeal and commitment to come up to the expectation of the people of the State. He said that the effort of the government was to make Himachal Pradesh a most developed and progressive state of the country for which whole hearted support and cooperation of the people was required.

He said that Central government led by Prime Minister Narendra Modi was sympathetic towards the developmental demands of the state. He said during recent untimely snow in Lahaul valley, hundreds of local and tourists got stranded there and it was due to the seven helicopters provided by the Centre that all of them were rescued safely.

Jai Ram Thakur said that the State Government would take up the matter with the Government of India to provide better connectivity to the land locked Pangi and Killar valley. The mater regarding providing better communication connectivity in the areas would also be taken with the appropriate authority.

The Chief Minister was presented a cheque of Rs. 10 lakh by Superintendent of Police, Chamba Monika on behalf of officers of Chamba district police. He also listened to public grievances and directed the officers for their immediate redressal.

Local MLA Jai Lal Kapoor said that the nine months tenure of the State Government headed by the Chief Minister Jai Ram Thakur had been committed for balanced and all-round development of the State. The government was also focusing on development of those areas which had remained neglected so far due to one reason of the other.

iednewsdesk May 2, 2022
A diverse group of students and recent graduates representing Cornell’s four contract colleges have been selected…