The Effect of GST on Your Child’s Education ……. At a Glance

Taxes provide a government with the means to fund the progress of a country. Every country adopts a taxation system that is best suited to its needs, making changes as and when necessary. India is just a step away from bringing in a major change in its taxation system by introducing the Goods and Services Tax (GST).

But the impending change has given rise to a sense of apprehension among the general population. And, the lack of information has further worsened the situation. Most don’t know how it will impact their household budget, especially the key to a better future, that is, the education of their children.

This article attempts to clear the fog surrounding GST and analyse its effect on education.

According to the Press Information Bureau, ‘GST is a single tax on the supply of goods and services, right from the manufacturer to the consumer.”

Under GST, there will be four tax slabs of 5, 12, 18 and 28 per cent. As a result, tax falling in between these slabs would be fixed in the closest bracket of 5 per cent. For example, if a product attracts a tax of 9 per cent at present, it would be taxed 12 per cent under GST. So, some services will become more expensive. But there are many products that will become cheaper as well. This will be decided by the GST council.

Also, after the introduction of GST, there will only be one tax, that is, tax on sale from the manufacturer to the consumer, as opposed to multiple indirect taxes at present. This is expected to lower the overall tax burden on most commodities and reduce their prices. Thus, introduction of GST is likely to eventually benefit the consumers.

Should parents be concerned?

Childcare expenses have increased in recent years because of high cost of childcare commodities. Under GST, while prices of commodities such as vegetables, flour, bread, salt, milk and eggs would remain unaffected, prices of skimmed milk powder, cashew nut, ghee, butter, cheese, packaged food, toys, etc., would increase. So, an increase or decrease in household expenses would depend on the ratio of consumption of high to low GST products.

As far as the education sector is concerned, successive governments in India, have shown their commitment to promoting education in the country by implementing various educational schemes. At present, the Government of India spends approximately 4 per cent of its GDP on education, of which 50 per cent is allocated to the primary education sector.

As a part of initiatives to encourage education in India, institutions providing educational services from preschool to higher secondary education, and approved vocational courses, have not been brought under the scope of GST, as of now.

However, with expanding opportunities for education in the private sector, GST could certainly have an impact if the government decides to tax private education at the lowest GST slab of 5 per cent.

Therefore, it is important for parents to understand how GST will affect their finances.

What will be the effect of GST on educational expenses?

According to the ‘*Schedule of GST rates for Services’, the service tax exemption will be continued for services provided–

(a) by an educational institution to its students, faculty and staff;

(b) to an educational institution, by way of–

(i) transportation of students, faculty and staff;

(ii) catering, including any mid-day meals scheme sponsored by the        Government;

(iii) security or cleaning or house-keeping services performed in such   educational institution;

(iv) services relating to admission to, or conduct of examination by, such       institution;

(c) Services provided by The Indian Institute of Management, as per the guidelines of the Central Government, to their students, by way of the following educational programmes, except Executive Development Programme:

(d) Further, any service provided by–

(i) the national Skill Development Corporation set up by the Government of India;

However, when it comes to coaching and tuition services rendered by any institute, the picture is still not clear – whether they would attract service tax as per the existing tax structure (14.5) or it will fall under the 12 to 18 per cent slab rate.

So, even after GST is imposed, no tax would be levied on services provided by educational institutions from preschools to higher secondary level.

When it comes to colleges and universities, again, those which conduct courses recognised by law for the time being in force are not liable to pay service tax. However, if an institution conducts certain courses that are not recognised by law, such courses will be taxed.

Some of the services which will be taxed are transportation, catering, housekeeping, services relating to admission or conduct of examination to higher educational institutions.

Goods procured from unregistered dealers or payments made to freelancers such as supervisors, research assistants, and paper setters will also be taxed under the reverse tax mechanism.

So, it is expected that imposition of these taxes would lead to an increase in costs in the range of approximately 2 to 3 per cent. However, Mumbai-based finance expert Sachin Ramnivas Bansal says that, taxing these services may not necessarily increase the costs across the board.

A clear picture will only emerge once the GST bill is passed on 1 July 2017.

Implications of GST on education

As school education, from preschools to higher secondary, has been exempted from taxes, it will keep tuition fees, and the cost of stationery and text books low. The benefits of this will hopefully be passed on to the students.

However, some of the programmes will attract taxes under GST. These include non-conventional courses of short duration, training programmes for working people, and educational events organised by a foreign-based entity. The rate of GST charged may range between 12 and 18 per cent.

So, students and professionals, enrolled in such programmes will probably end up spending more in terms of fees.

Tips for parents to plan expenses, especially for higher education

How GST affects the common man will be known only after the system has been in place for some time. However, right now, it is always safe to put a plan in place to meet the short, medium and long-term education expenses.

For the long term, it would be a good idea to identify a few career options, inflate their current cost by a conservative estimate per annum for the number of years after which you will require the funds.

This will give you an idea of how much you will need to save every month to meet the expenses when they arise in the future.

Based on inputs from: 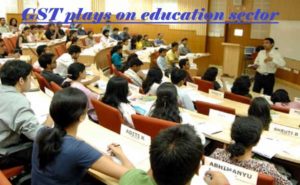