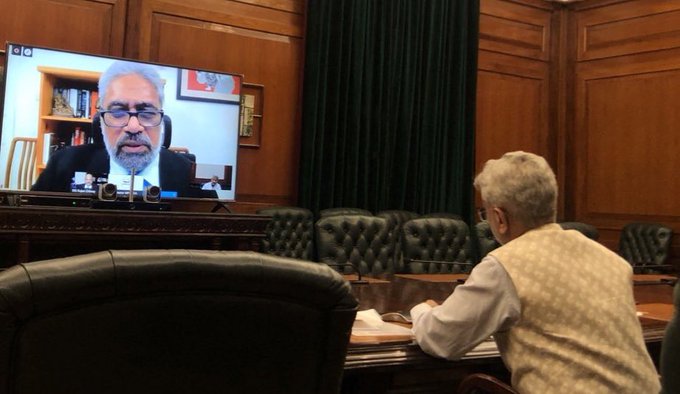 New Delhi: On February 25, 2021, Dr. C. Raja Mohan, Director, Institute of South Asian Studies, National University of Singapore, delivered the 2021 edition of The K. Subrahmanyam Memorial Lecture on the topic of ‘When to Intervene: Using Force Beyond Borders’. The Lecture was organised by the Manohar Parrikar Institute for Defence Studies and Analyses (MP-IDSA) as a tribute to the memory of a distinguished scholar and one of India’s foremost strategic thinkers, Shri K. Subrahmanyam, who also long served as the Institute’s Director in its formative years. Dr. Subrahmanyam Jaishankar, Hon’ble Minister for External Affairs, and the son of Shri K. Subrahmanyam delivered the Vote of Thanks.

In his Welcome Address, Director General, MP-IDSA, Amb. Sujan R. Chinoy, highlighted the contributions of Shri Subrahmanyam to the Indian strategic discourse and described him as a man who stood for robust national security structures and postures. Shri Subrahmanyam was one of the first to articulate the notion of “guns and butter” as against “guns versus butter, observed Amb. Chinoy. Shri Subrahmanyam was an early advocate of defence reforms, the nuclear option, improved intelligence inputs, and the dexterous engagement of great powers. His advocacy of the nuclear deal with the US also stands out.

In his Lecture, Dr. C. Raja Mohan also paid rich homage to Shri Subrahmanyam, describing him as the principal voice that explained the world to India and vice-versa. One of his biggest contributions to the strategic discourse was to free the debate in India from ideological shackles, he observed.

Speaking about the complexities faced by India on the use of force beyond borders, and about carefully managing the unavoidable and dynamic interaction between the domestic political processes of India and other countries, Dr. Raja Mohan said that effectiveness, success and legitimacy should all be considered in analysing interventions. India’s decision to use force beyond borders should be based on its judgment of the situation, as it cannot afford to either stand apart, or intervene in every domestic conflict in the neighbourhood, he added.

Drawing a parallel between India’s traditional and current foreign policy stance, Dr. Raja Mohan said that the country now seems to have moved away from the ‘presumed centrality of non-intervention in foreign policy’ and out of the collective amnesia about the Indian role in the two World wars which the current government has brought to the fore.

Offering the Vote of Thanks, Dr. Subrahmanyam Jaishankar  recalled many personal episodes in his late father’s life and the impact that his father’s strategic thought had on an entire generation of scholars and practitioners including Dr. Raja Mohan and himself. He added that the use of force abroad may no longer be considered a completely defensive move. Intervention is now also used for the common good, such as humanitarian and disaster relief operations or the development of maritime domain awareness.  Dwelling further on his father, Dr. Jaishankar noted that Shri Subrahmanyam was tempered by experience, learnt from the intersection of his thoughts with politics, and gradually evolved with the times. Over the years, his interest expanded beyond the use of narrow military force towards issues such as knowledge economy, supply chains, dependency, leveraging trade, etc. Shri Subrahmanyam also had the opportunity to apply all his rich knowledge and experience during his chairmanship of the Kargil Review Committee and the National Security Advisory Board.