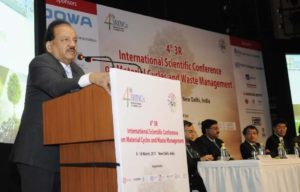 New Delhi- Science and Technology Minister Dr. Harsh Vardhan today said that India has been a key player in promoting the efficient waste management system in the world. “ Prime Minister Narendra Modi has played a key role at the international platform to develop the sense of waste management and material cycles. Now we need a directional change and positive approach for making a bigger impact,’’ he said.
Dr. Harsh Vardhan was speaking after inaugurating the ‘4th 3R International Scientific Conference on Material Cycles and Waste Management’. The conference focuses on promoting techniques of the waste management and spread the concept of Reduce, Reuse and Recycle (3R) principles. Delegates from Japan, Korea and Germany are participating in the three-day conference, organized by the CSIR-Indian Institute of Petroleum (IIP).

Chemical and Fertilizers Minister Anant Kumar pointed out that about 4,500 urban areas in the country generate 55 million ton of waste every year out of which only one million ton is converted into compost which ideally should be 5.5 million tonnes annually. For the first time, he said, the Modi government was giving subsidy for making compost from waste and a 50 kg bag of compost would cost only Rs. 75 for farmers.
Anant Kumar said, the biggest concern today of the environmental problems posed by plastic waste and food packaging. Most of the hazardous waste is generated by the pharmaceutical and medical devices industries. Mr. Kumar said that 12 million tonnes of plastic can be reused and recycled. Further, he suggested “Reduce, Recycle and Reuse (3Rs) should be a part of the curriculum in the syllabus of schools at primary and secondary levels. Prime Minister Modi is concerned about the climate change and has launched the Swachch Bharat Mission.”

He announced that his Ministry was ready to ink a MoU with CSIR for setting up a task force for promoting 3Rs. He appealed to use ‘2R (Reuse, Recycle)’ material instead of ‘waste material’. Mr. Kumar said that a Guwahati-based unit was treating two tonnes of plastic waste daily and the plan was to set up 100 such units across the country to give a push to 3R projects. “As plastics are everywhere from automobiles to hospitals and it is not biodegradable, it is a big challenge to contain this menace,’’ he said.

Minister of Railways Suresh Prabhu spoke about the challenges to deal with the waste to use as next value chain. He emphasised upon the control and reuse of toxic and industrial waste. He added, “Agriculture waste should not be burnt. If they are disposed into the soil, it becomes natural manure. CSIR is focusing on such crucial issues which are a welcome step. This is the time to link culture with science. We should term the agri-waste as a key resource for waste management.”

The Director General CSIR, Dr. Girish Sahni said that CSIR has major focus on developing the technology for creating wealth from the waste. It is endeavouring that the technology developed should be energy efficient and affordable. Dr. Anjan Ray, Director, CSIR- Indian Institute of Petroleum and Chairman, 4th 3R INCs were also present at the conference along with the minister. Dr. Ray said, “3RNCs is an opportunity for all stakeholders interested in the broad area of waste management as a key component of a sustainable future for Planet earth, and more specifically in progress towards a robust Material- Cycle Society that aims to preserve resources.”

Minister of Railways Suresh Prabhu spoke about the challenges to deal with the waste to use as next value chain. He emphasised upon the control and reuse of toxic and industrial waste. He added, “Agriculture waste should not be burnt. If they are disposed into the soil, it becomes natural manure. CSIR is trying to such crucial issues which are welcome steps. This is the time to link culture with science. We should term the agri waste as a key resource for waste management.”
The earlier 3RINCs events were organised in Japan (2014), Korea (2015), and recently in Vietnam (2016). India being the fastest growing economy faces an urgent need for solutions towards waste accumulation.