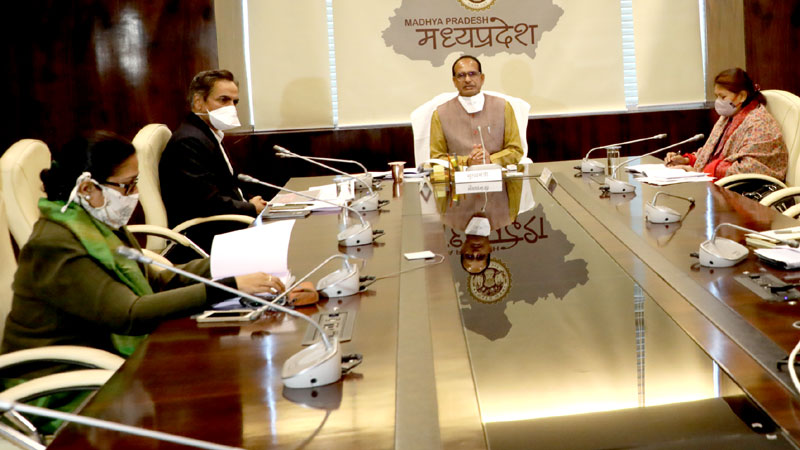 Efforts should be made for progress along with preservation of tribal traditions and life values:​​ CM Chouhan

Bhopal : Chief Minister Shri Shivraj Singh Chouhan has said that the state government is committed to the welfare of people including the tribal class who are lagging far behind in development. These classes are the first to have the right over the government treasury also. Chief Minister Shri Chouhan said that efforts will be made for their integrated development by upholding their traditions, life values ​​and culture of the tribals. Chief Minister and Chairperson of the Council Shri Chouhan said this in a meeting of the Tribal Advisory Council held at Mantralaya through video conference today.

It was informed on the occasion that a new museum focusing on tribal life will be started in Shahdol division by the department. For this, a suitable site in Umaria or nearby will be selected. At present, this type of museum of the department is operating in Chhindwara.

Chief Minister Shri Chouhan said that if there is a need to change the nature of the tribal welfare schemes, then such changes will be made after a study. He said that the implementation of the Pesa Act in Himachal Pradesh and other states will be studied and necessary decisions will be taken. The Chief Minister said that hostels will also be started for tribal students as per requirement.

The Chief Minister Shri Chouhan said that an initiative was taken to amend the Madhya Pradesh Scheduled Tribe Money Lenders Regulations-1972 to protect the tribal class from loans with huge interest from moneylenders. The provision of loan from such moneylenders by making license mandatory for moneylenders and the process of waiving loans given against the rules was started through the Madhya Pradesh Scheduled Tribe Loan Waiver Bill-2020. Chief Minister Shri Chouhan sought information about the implementation of statutory provisions regarding compulsion of license of the moneylender. A total benefit of Rs 218 crores has been provided to the beneficiaries of the ST category under the Dietary Grant Scheme. He said that such efforts will continue in the interest of the tribal class.

Forest pattas to all eligible persons

Chief Minister Shri Chouhan said that the implementation of tribal welfare schemes should lead to change in the lives of tribal class. No one will be allowed to usurp the property of tribal class. He said that no eligible person will be deprived of forest rights. The Chief Minister directed to ensure that there are no new cases of possession. Forest rights should be given to those occupying pattas before December 2006. Action will be taken against those who intend to marry tribal girls for possessing their land.

Chief Minister Shri Chouhan said that the benefits of the schemes should be provided to the people of special backward tribes like Baiga, Sahariya and Bhariya for residing anywhere in addition to their actual place of residence. He said that efforts will be made to provide economic benefits to the people of tribal class for other forest produce like tendu leaf. In addition to 14 forest produce in the state, purchase of 18 new minor forest produce has been started on support price. Chief Minister Shri Chouhan instructed departmental officers that tribal welfare schemes should be given pace. The work of Joint Forest Management Committees should also be reviewed.

Health survey of tribal population will be conducted

Progress of Akansha scheme is laudable

Chief Minister Shri Chouhan said that free coaching is imparted to tribal students under Akansha scheme. To take advantage of this scheme, 721 students took admission and the selection of 541 out of these students for JEE, NEET and CLAT is a special achievement. The progress of the scheme is commendable. In the meeting it was informed that the tribal students will be given Rs. 50 thousand each for their selection in JEE, NEET, CLAT, NDA, NIIT, FDDI, NIFT and IHM under Pratibha Yojana and Rs 25 thousand for other examinations. About four and a half lakh students were benefited last year under the Post Matric Scholarship Scheme. Chief Minister Shri Chouhan said that the suggestions made by the members of the Council are very important and will be considered and implemented.

Principal Secretary, Tribal Welfare Smt. Pallavi Jain Govil gave information about departmental activities in the meeting. As many as 86 Van Dhan Kendras have been made in the state. Tribal Pride Day was held in Barwani and Umaria. There are currently 2645 ashrams, sports complexes and other institutions in the state with about one and a half lakh students enrolled in them. There are 126 specialized residential institutions in the state. Tribal Welfare Department is running 22 thousand 592 primary schools, 6800 secondary schools, 731 high schools and 860 higher secondary schools.