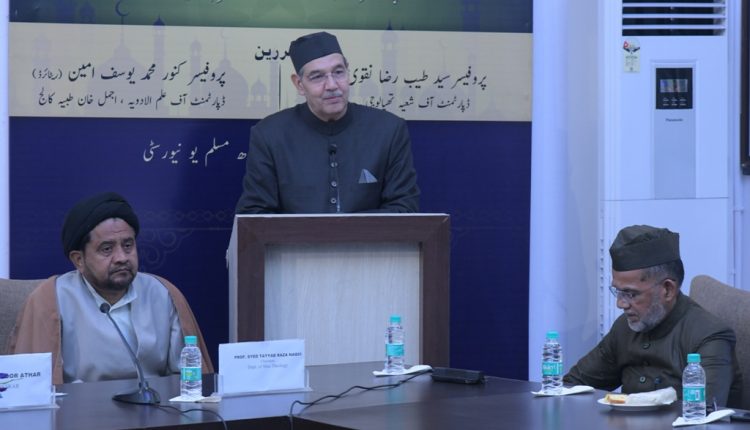 Aligarh : The life of Prophet Muhammad (Peace be upon Him) is a model for every human being. Peace and justice can be established in the world by adopting his teachings, said Prof Tariq Mansoor, Vice Chancellor, Aligarh Muslim University (AMU).

He was delivering the presidential address in the online Eid-e-Milad-un-Nabi (Birth anniversary of the Holy Prophet) function in AMU.

Prof Mansoor said the teachings of the Prophet (PBUH) can be seen in his actions and deeds. “He presented practical examples which led to positive changes in the society and a revolution took place. There is a lesson for today’s leaders in this”, pointed out Prof Mansoor.

He said, “The life of the Prophet Muhammad inspires everyone because he practiced justice, equality, honesty, simplicity, and kindness towards Muslim and non-Muslims. Flexibility and moderation was the hallmark of his approach which attracted everyone towards his teachings.”

The Vice Chancellor said every record of Prophet Mohammad’s life is available and we can see comprehensive guidelines in his actions and sayings.

Highlighting the importance of seeking knowledge in Islam, Prof Mansoor said Prophet Muhammad gave importance to knowledge and made it necessary to acquire it. He also called for justice for women, gave them rights and said that women should not be barred from education.

“Whether it is war or peace, the Prophet strictly forbade abuse and injustice even against non-Muslims. We need to follow the life of the Prophet Muhammad and his teachings and not allow differences of opinion and creed to overwhelm us”, concluded Prof Mansoor.

Addressing the Eid-e-Milad-un-Nabi function Prof M Yusuf Ameen (Retd.), Department of Ilmul Advia, AMU, said it is the responsibility of today’s youth to study the Prophet’s biography and his sayings, and follow the path shown by him.

Prof Tayyab Raza Naqvi, Chairman, Department of Shia Theology, AMU said that Prophet Muhammad (PBUH) was endowed with great morality. In the Battle of Badr, non-Muslim prisoners were released in exchange for imparting knowledge to Muslims. “The Prophet said it is far better to seek knowledge and education than to acquire wealth, no matter how hard it is to do so”, Prof Naqvi stated.

He said during the conquest of Makkah a general amnesty was declared by the Prophet. It is hard to find precedence for such kindness towards enemies.

Delivering the welcome address Prof Saud Alam Qasmi (Dean, Faculty of Theology, AMU) said Eid-e-Milad-un-Nabi functions have been organized at MAO College/AMU since the times of Sir Syed Ahmad Khan, who wrote books on the life and teachings of Prophet Muhammad (PBUH).

Earlier, Prof Tariq Mansoor inaugurated an online ‘Seerat Exhibition’ organized by Maulana Azad Library, which featured rare manuscripts and books based on the biography of the Prophet.