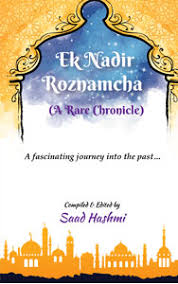 By Shahab Hashmi
Written entirely based on authentic facts, ‘Ek Nadir Roznamcha (Highbrow Scribes Publications, 2021)’ represents its times objectively, clearly and most importantly, without a bias. Events are reported as they happened. Backed by volumes of hard work that is still preserved, this history does not lean left or right—untainted by individual whims or beliefs, this is as close as it gets to reality. Remarkably compiled and edited by Saad Hashmi, the chronicle is a marvellous work of a lifetime by Maulvi Mazhar Ali.
The book encapsulates the socio-political landscape during British India, providing insights in the lifestyle of every section of the society bringing the nuances of the social order, morality and value system. One can very well understand the genesis of the colonial legacy which is still prevalent today in the Indian sub-continent. The book gives intricate details of the transformational time where modern lifestyle was fast making its way into India like the advent of railways, electricity, use of modern tools and machinery. It also offers an overview of the tectonic shift to the modern education system and social dilemmas in every society on how much to gravitate towards this new system of education.
International events provide glimpses of the world order in the later part of the nineteenth century and the changing dynamics across the globe, including of the historical facts about monarchies, the ups and downs in politics and emergence of new democratic setups. Statistics provided in the book are rare and would surely be a handy reference for researchers as well as readers. Insightful data snippets are provided for census, wars, economies, inflation and other interesting indicators from authentic sources of information called out across the book.
Detailed information is provided about Sandila and adjoining vicinity including Lucknow, Hardoi, Allahabad and other towns in the erstwhile United Provinces. Local events such as arrival of dignitaries as well as catastrophes such as cholera, drought, famines & floods are well covered. Plight of the poor, communal disturbances, caste divides and gender issues of the times can be well perceived from the accounts provided through sources of entertainment such as gathering of elites’ song and dance shows.
Maulvi Mazhar Ali was held in high esteem by the British and was employed in the railways where he worked diligently and was also involved in the management of the town’s municipality. He was also respected in his own and the extended family and it is evident from the fact that his aunt used to trust and get his counsel in all the matters pertaining to her household. He used to do introspection very often and would learn from his mistakes and constantly reflected upon his life and made amends to his personality and behaviour. He was particularly concerned about the well-being of relatives and paid attention to the right upbringing of his children. He had great rapport with Raja Durga Prasad, another respected figure in the town and his exchange of ideas through meetings and letters provide a glimpse of the social fabric of the country.
Once you immerse yourself in this masterpiece of work, you would thoroughly enjoy and live the life of that era. The best feature is that you may read it as a book or glance through an important page in history—and the snippets provide immense knowledge and pleasure for the readers.
Shahab Hashmi writes about the books.