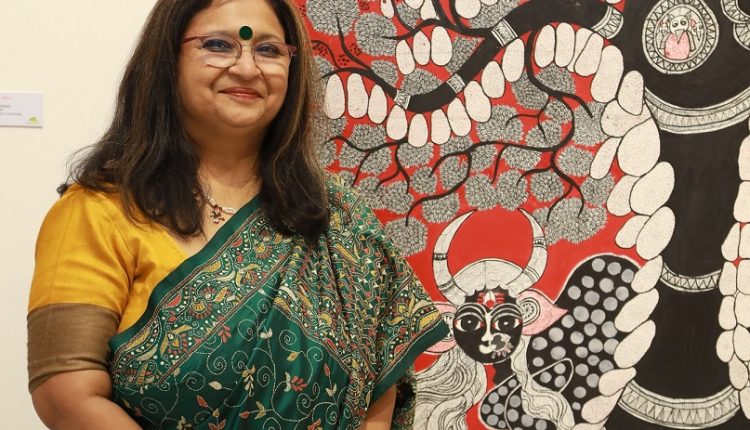 New Delhi: Art Tree continues to honour its commitment for promoting traditional and folk arts as also support their practicing artists. In its yet another attempt at focussing on some of India’s rich heritage, a 9-day exhibition started at Bikaner House in New Delhi on the 22nd December, 2021. The exclusive preview was inaugurated by artist, designer filmmaker Muzaffar Ali.

On the occasion, Pragati Agarwal- Founder Art Tree, said, “Art Tree has always endeavoured to boost, support and encourage the sustenance of some of the enriching traditional forms that will eventually get revived and lead to their resurgence.”

Muzaffar Ali who seemed extremely pleases meeting the featuring artists- Prakash Joshi and Manisha Jha, said, “ I am immensely impressed by all the rich history that gets depicted in such intricate works of the artists who are trying their best to preserve tradition that India is known for. Ekayan – Ek Sutra showcases three art forms – Madhubani, Phad and Chintz – all under one roof at Bikaner House, and it has been an educative experience for me to see such great works of these national award winning artists.”

A panel discussion on The Legacy and Revival of Chintz with artist J.Niranjan and Indian handicrafts curator Jaya Jaitly and Sanjay Garg of Raw Mango turned out to be a scintillatingly engaging discussion for the passionate audience present. Ms Jaitly pointed out that the original nomenclature Radhapani and not the British named chintz be used. “Because they could not pronounce the original word, Chheent’ they changed it to chintz derogatorily. I am so glad that an artist of Niranjan’s calibre is the one who has taken so much pain to revitalize and restore such a rare art form.”

Ms. Jaya Jaitly said, “The British had appropriated most of our most prized culture. But I am glad that the young have shown interest in reviving some of the most talked about heritage. Some of these artists also need our support and we must make sure that they are looked after well.

On the occasion, Art Tree will also organised a book launch of the book – Madhushravani by Ms Manisha Jha. Documented in fourteen years by the author this book has hundred paintings by two hundred women artists from different villages of Mithila. Madhushravani is a monsoon festival of new brides, laughter, snake goddesses, and rituals that fuse ecology and tradition. The thirteen days festival speaks of co-existence and instils love for nature. This book is first ever book on fourteen stories related to Lord Shiva and his family and stories of Goddess Manasa- the snake Goddess

Culture generates social capital and strengthens a community’s character. Art brings people together physically — at galleries, museums, performance spaces — and culturally, through its capacity to tell a community’s shared story, to inspire reflection, and form connections that transcend differences. Ekayan- Ek Sutra attempts to bring together three traditional art forms together under one roof for both connoisseurs and art lovers to allow themselves a glimpse of the wide variety that India consists of. Be it the South – Chintz; or the West – Phad; or the East- Madhubani, it is Ekayan or the Oneness of diversity that is a cause of our celebration, and hence, Ekayan- Ek Sutra becomes the binding factor in uniting the three together.

Manisha Jha, an architect by profession has contemporized the idiom of Madhubani Paintings by becoming first woman artist to bring this art in Commercial Art Galleries. She is the first woman artist in India to document the oral narratives of Bihar, like Madhushravani festival, Ramayan and Mahabharat as narrated in the villages across Mithila. She is also the first woman artist from Mithila, who has been considered as mainstream contemporary artist. She has been painting since last twenty-eight years and has been exhibiting her art in galleries for the last eighteen years. She has done more than 70 shows in India and abroad.

J Niranjan is a 4th generation Kalamkari artist, and has learned the craft from his father Padamshri Guruappa Chetty. He is recognized for his unique subjects and great fluidity and movement of his figures. His learning and study of classical dance to give the right stances to his kalamkari figures; and his visits to many temples seeking their unusual and unsuspected themes have been inspiring. He works towards promoting the usage of Natural Dyes in Kalamkari to protect the environment and artisans lives from the pollution that is created by using the chemical dyes. Presently, he is working on revival of Chintz. He is inspired to do so after seeing the works of his forefathers at Norwich, Manchester and V&A Museum London UK.

Prakash Joshi hails from a family of Phad painters. The Joshis of Bhilwara have been practicing this art form for more than 400 years. Apart from learning the art from his father, Shri Nandlal Joshi, Prakash has experimented with traditional art form. He has learnt miniature art to hone his skills. Phads which are traditionally made in large sizes are now getting into the drawing rooms of people in small sizes. Prakash is creating a whole series of Phads for Ekayan-Ek Sutra in miniature formats. This is first time that Phads are being done in miniature format.