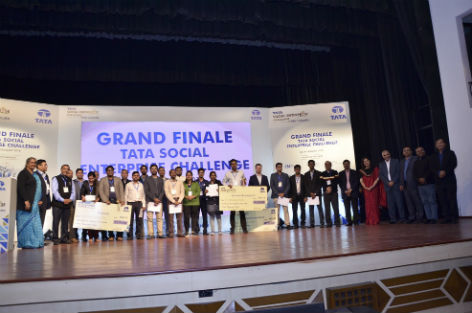 Kolkata: The winners of the Tata Social Enterprise Challenge 2017-18 (TSEC), a joint initiative of the Tata group and Indian Institute of Management Calcutta (IIMC), were announced during the grand finale held on January 6, 2018, at the IIM Calcutta campus. The challenge endeavours to find India’s most promising early-stage social enterprises, and create an ecosystem for social entrepreneurship – encouraging sustainable, scalable and measurable social impact.

• Mentorship: The top 20 teams were selected for semi-finals and provided mentorship support for two weeks.
• Funding Opportunity: All teams shortlisted for the semi-finals and finals get an opportunity to pitch to India’s largest social VCs for seed funding.
• Incubation: The top 20 teams will get an opportunity to pitch for incubation at IIM Calcutta.
• Cash Award: Total prize money of ₹6 lakh for the top three teams. The semi-finalists received travel grants.

The Elbow Engineers, the winner of the challenge, is a Chennai-based startup that has developed a device to provide a comprehensive water generation solution. The device generates water by condensing water vapour from the atmosphere, it purifies the generated water through an Ultra Violet Light sterilizer providing clean drinking water at less than 84 paise per litre, and in the process cleans the air that we breathe of harmful substances.

Chakr Innovation, which was announced as the first runners-up, is a New Delhi-based startup that has developed Chakr Shield, a device that can capture 90% of particulate matter emission from diesel generators. The device controls pollution without causing any adverse impact on the engine’s performance or the environment, and at the same time converts the collected particulate matter into raw material for inks and paints.

JK Nanosolutions, the second runners-up, is a Bengaluru-based startup. It has developed a cost effective rapid solution for complete treatment of waste water and textile effluent using nanotechnology. By this method, 98 percent of treated water can be reused.

Apart from the top 3 winning ventures, the 7 ventures that have made it to the top 10 finalists are, Bombay Bijlee, Villamart, Cerelia Nutritech, Manuring It!, Nanobios lab, IIT Bombay, Resnova Technologies and Sonant Technologies. The ventures were judged on three parameters – Business Model, Social Impact and Sustainability (For more details on the ventures, please refer to Annexure 1).

Speaking on the occasion, Prof. Ashok Banerjee, Director, IIM Calcutta Innovation Park said, “Over the last six years, Tata Social Enterprise Challenge has encouraged many budding entrepreneurs to grow with a vision and create positive sustainable social impact. We are pleased with the quality of talent and the enthusiasm of entrepreneurs who have dreams to make a difference to the society to which they belong.”

Mr. Sandeep Kumar, Managing Director, Tata Metaliks, felicitated the winners and said, “Listening to and meeting the finalists of Tata Social Enterprise Challenge was an enriching and inspiring experience.”

The Tata Social Enterprise Challenge 2017-18 received over 500 proposals from across India, of which 205 met the eligibility criteria and qualified for the next round of the competition. These proposals covered several different areas such as agriculture; food and dairy; healthcare; water and sanitation; technology and development; education and skills development; housing; handicrafts; energy; and microfinance, among others.