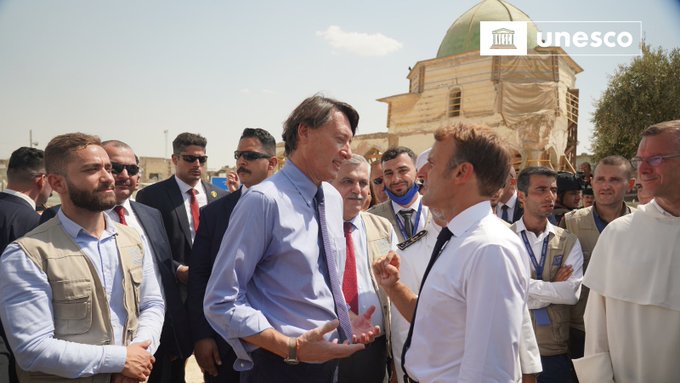 President Macron’s visit to the city of Mosul carries an important message of support and hope for Moslawis who suffered through a violent and oppressive occupation for four years that nearly ripped the soul from a city that has been a cultural and religious crossroads for centuries. Mosul is among the larger and more historically significant cities of the Arab World.

Macron was welcomed by Paolo Fontani, UNESCO Representative to Iraq, Fr. Olivier Poquillon O.P., in charge of Our Lady of the Hour, Najm al-Jubouri, Governor of Nineveh, Fuad Hussein, Iraqi Minister of Foreign Affaris, Monseigneur Najib Mikhael Moussa O.P., Archbishop of Mosul, Saad Kambash, President of the Sunni Waqf of Iraq, Monseigneur Raed Adel, in charge of the Syriac Catholic Churches in Mosul, local government, and SBAH, actively involved in the reconstruction and rehabilitation of the historic landmarks of Mosul.

The French President toured the Al-Nouri Mosque Complex being rebuilt by UNESCO with Rakan Al-Allaff, Senior Culture Officer, and witnessed first hand the progress that has taken place on site. He was impressed by the beauty of the mosque and was touched by the damage that struck the Al-Hadba Minaret. During the tour, Macron entered the warehouse in which all the historical fragments were collected and was impressed by the huge amount of work done by UNESCO in such a short period.

During his tour in Our Lady of the Hour, Dominican Convent, being rehabilitated by UNESCO, Fr. Olivier Poquillon O.P., in charge of Our Lady of the Hour, gave President Macron details about the church and convent built in the 19th century. He witnessed the progress that has taken place on site, in the framework of the UNESCO project to Revive the Spirit of Mosul, supported by the United Arab Emirates (UAE).

Macron highlighted the need to act on the reconstruction of education and cultural landmarks. In this spirit, he commended the work of UNESCO on the ground as a key accelerator for stability and cohesion in the country.

The battle for Mosul left behind an estimated 8 million tons of rubble and destroyed prominent historical landmarks. Al-Nouri Mosque was destroyed and Our Lady of the Hour, Dominican Convent was damaged.

UNESCO set forth on a path of reconstruction and reconciliation to bring this rich and diverse city, with its pluralistic history at the crossroads of cultures and religions of the Middle East, back to its former glory. At the Kuwait International Conference for the reconstruction of Iraq, in February 2018, UNESCO Director-General, Audrey Azoulay, announced the launch of the Organization’s flagship initiative, “Revive the Spirit of Mosul”.

At its heart, “Revive the Spirit of Mosul” is UNESCO’s response for the recovery of Mosul by empowering the population as agents of change involved in the process of rebuilding their city through three main axes: heritage, education and cultural life. The Initiative was born to carry a strong message of hope and resistance to Iraq and to the world: a message that an inclusive, cohesive and equitable society is the future that Iraqis deserve.

As a first major step towards the recovery of Mosul, UNESCO is working on the rehabilitation of Al-Nouri Mosque and its famous Al Hadba leaning minaret, Al-Tahera Church and Our Lady of the Hour, Dominican Convent, funded by the United Arab Emirates. Other donors of the Initiative include the European Union, the Flanders, The Netherlands, Canada, Japan, Sweden, Italy, Latvia and Germany. Beyond the rehabilitation of architectural landmarks, the initiative includes on the-job training for young professionals, strengthening the capacities of craftspeople, job-creation opportunities and technical and vocational education.