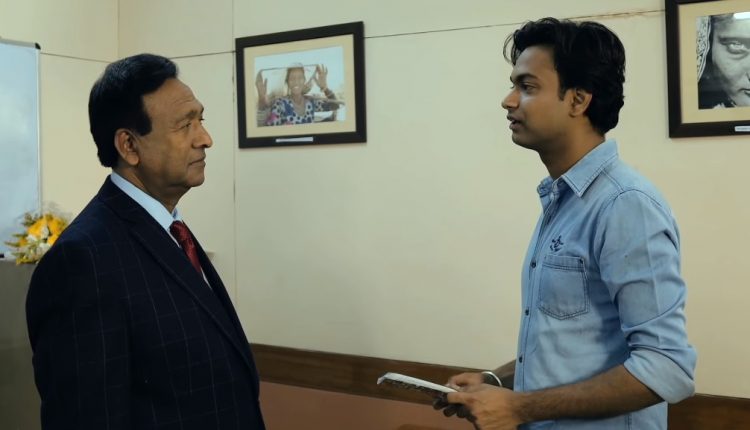 New Delhi : Tirlok Malik, an Emmy-nominated Indian-American filmmaker, has come out with an inspiring new short film titled ‘To New India with Love,’ which examines the subject of youth aspirations. The film recently premiered on the YouTube channel of nritvfilmclub, following which it will be released on television and various digital platforms worldwide.

The short film is available to watch / review at the following link:

Tirlok Malik is best known for making films about Indian immigrants in the US, starting with his pioneering work, the 1990 film ‘Lonely in America,’ which Malik wrote and produced, and he also acted in it alongside Ranjit Chowdhry. ‘Lonely in America’ was shown in 74 countries and as well as on HBO and participated in 37 film festivals, winning several awards. He subsequently made films like ‘Love Lust and Marriage,’ ‘Khushiyaan,’ and ‘On Golden Years’. He has also acted in films like ‘Dr. Babasaheb Ambedka,’ ‘Lajja,’ ‘Vettaiyaadu Vilaiyaadu,’ ‘Ta Ra Rum Pum,’ ‘Sivaji: The Boss,’ and ‘Mehbooba,’ among others.

Tirlok Malik’s work as a producer, director, and actor has been acclaimed in the international media including Hollywood Reporter, Variety, New York Times, etc. and has won him many awards internationally. He continues to make films about issues pertaining to the Indian diaspora. “In my films, I try to tell stories about the challenges of being an immigrant. I see that when you migrate, there are many emotional conflicts and through my films I present a view where one can feel more assimilated and less conflicted,” asserts Malik.

His latest offering “To New India with Love” tells the story of a young college student who asks a visiting NRI professor to help him go to America as he has his passport ready with him. The professor reminds him that “New India is in the making” and that he must play his part in contributing to New India. Vijay does not agree and expresses his frustrations and current struggles, proclaiming “New India is all about faking”.

“‘To New India with Love’ is aimed at empowering the youth of India. The heated debate at the heart of the film shows how sometimes a conversation can change the direction of one’s life. Many young people want to leave India, but all of them cannot get visas. Moreover, migration is a choice that one makes and there is an emotional price associated with it. But, ultimately, it is up to an individual,” Malik opines.

‘To New India with Love’ stars Tirlok Malik (Professor Khanna), Aryan Pratap Singh (Vijay) and Dalip Maccune (as Dean). The screenplay and dialogues are written by Murtaza Ali Khan. While Rakesh Zharotia is the film’s editor and assistant director, Vijay Chauhan has served as the DOP.

This short film is a non-commercial venture, produced with a public-service spirit, appealing broadly to Indians worldwide. It is presented by Padma Shri Dr Sudhir Parikh.

“The germ of the story idea for the short film comes from a real-life experience of mine and many other NRIs who often get asked by the youth of India to help them move abroad for better work prospects. The film aims at creating greater awareness about the role that NRIs can play in mentoring the Indian youth to help them create greater opportunities for themselves,” reveals Malik.

The Indian-American film industry has undergone a lot of changes since Malik made ‘Lonely in America’. “When I made ‘Lonely in America’ there were hardly any films about Indian immigrants. But the film’s success opened up new horizons for young filmmakers who wanted to touch upon similar issues,” recollects Malik who feels that the Indian-American film industry needs greater support from the Indian-American audience. “I have always felt that filmmaking is one area that Indians living in the USA need to make a bigger mark. There is a lot of talent and hopefully they will get a chance to shine. In times to come I see it growing into a much bigger film industry,” sums up Tirlok Malik who currently has a feature film and a short film in development.