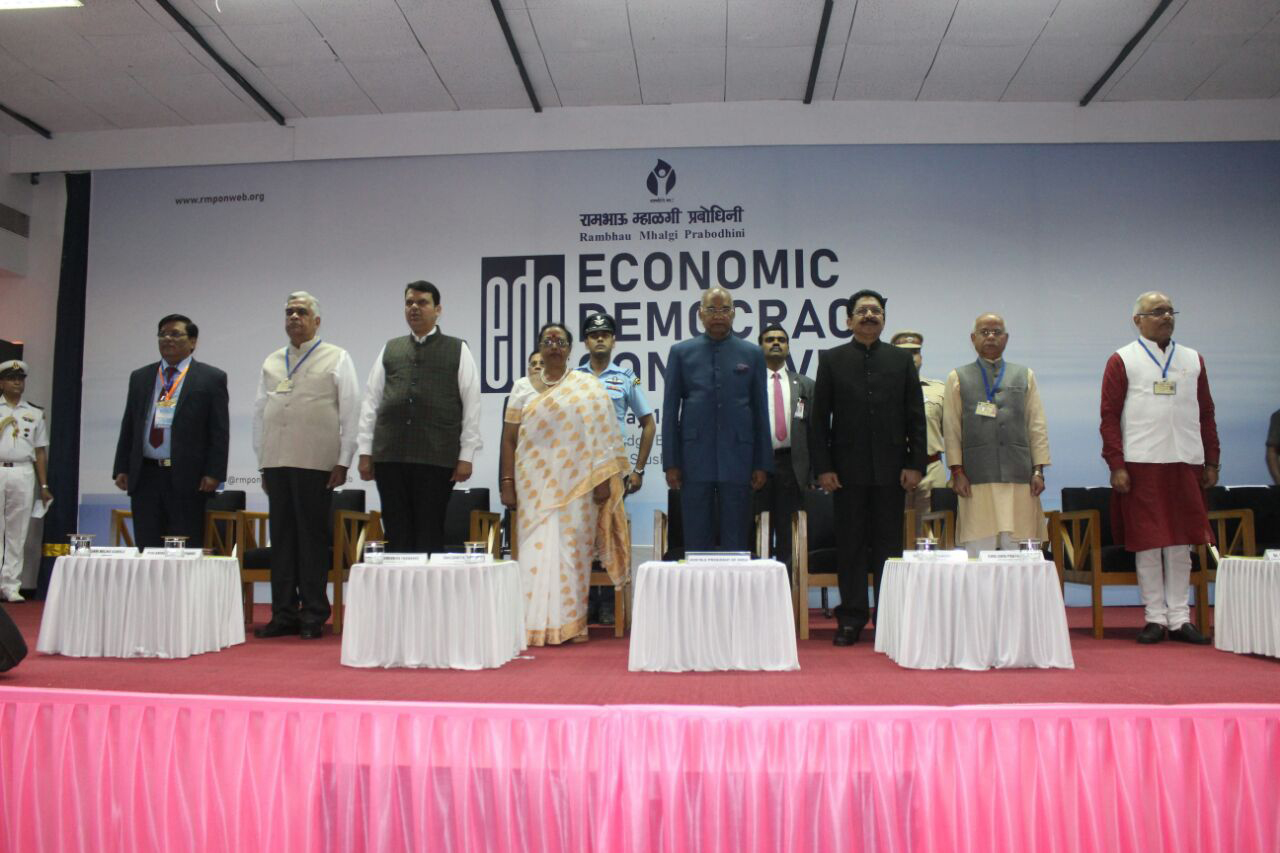 Encourage Youth to be ‘Job-giver ‘and not ‘Job-seeker’: Ram Nath Kovind

The President at the beginning of his speech at ‘Economic Democracy Conclave’ blessed all the enterprising youth in Marathi. He shared his memories about his association with the Rambhau Mhalgi Prabodhini and praised its values of discipline, dutifulness, commitment and work culture. The President also highlighted that the Mumbai, the financial capital and surrounding region host number of opportunities for all ranging from self-employed vendor to corporate industrialist. He then appealed to all youth that they should play role in development of society and economy by utilising these opportunities. He further congratulated the institute for taking up this initiative and extended his best wishes.

The President acknowledged, as voter awareness is done for building political democracy, similarly, there is also need to inform and inspire people of their socio political rights, policies and opportunities, particularly for the marginalised section of the society. He attributed Dr Bababsaheb Ambedkar as founder of Economic Democracy in Modern India and emphasised that Socio-Economic Disparity must be dispelled and Socio-economic Democracy is essential to strengthen Political Democracy. All citizens must get socio-economic and political justice. Therefore, many programmes like – Jan-Dhan Yojana, Mudra Yojana, Stand-Up India and Start-Up India, have been initiated based on Sabka Sath, Sabka Vikas and ‘Sabka Samman, Sabka Utthan’.

He highlighted that out of 30 Crores Jan-Dhan Accounts opened in banks; about 52% of accounts are of women, making society financially more inclusive. He also noted that domestic saving should not be kept idle but invested. In this context, awareness about financial literacy is critical, which shall inculcate enterprising spirit while strengthening economic democracy. He also noted that financial inclusion through Jan-Dhan Yojana and subsequent Direct Benefit Transfer Scheme has improved transparency and minimised corruption.

The President called upon to impart skill training to empower and encourage enterprising youth. Such young entrepreneurs are being supported by Prabodhini and DICCI (Dalit Indian Chamber of commerce & Industry) like institutions, also Private sector industrialists like TATA Group have extended opportunities, He added. He expressed confidence that youth shall make best of opportunities created through government programmes and non-government facilities through NGOs, NBFCs, Media and they turn up to self-employment as a matter of choice, becoming ‘job-giver’ than job-seeker’.

Chief Minister of Maharashtra, Shri Devendra Fadnavis expressed confidence that, at this conclave, many of our youth would share their experiences and deliberate by which a future roadmap for a strong global power called ‘India’, will be prepared. He said, our nation achieved political equality with the power of voting to all but our democracy can be strengthened only when financial and social equality too is achieved. This was dreamt by BharatRatna Dr Babasaheb Ambedkar and we are marching forward in that direction. After 70 years of independence, with all such schemes we have opened up the doors of banks for the masses, which were earlier limited to only classes. This is enabling every citizen to stand on his own feet and be independent. This is the true meaning of empowerment, he added.