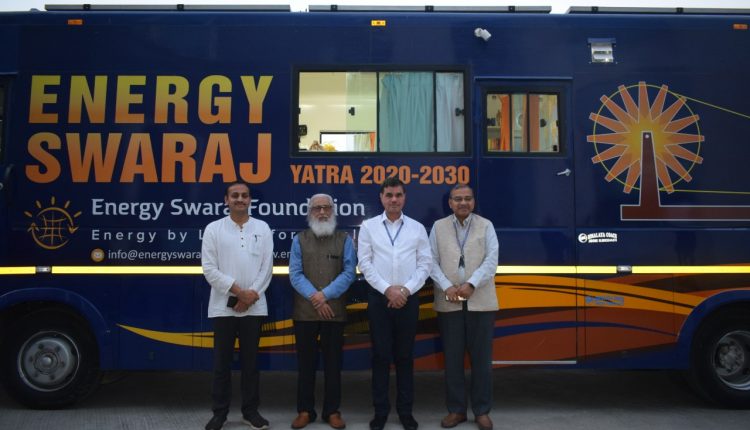 New Delhi: The All India Council for Technical Education (AICTE) conducted a talk on the subject titled a talk on ”Energy Swaraj – An Essence of Sustainability” on March 13, 2020. The session was headed by Prof Chetan Singh Solanki from the Department of Energy Science and Engg., Indian Institute of Technology (IIT), Bombay who is widely known as the Solar Man and Solar Gandhi for his endeavors to promote solar energy in India.

Addressing the students and faculty members at AICTE, Professor Chetan Singh Solanki talked about the vitality of embracing solar energy in the future, as it is the only unending source of energy available for humans on earth. He also pointed out the adverse effects of increased consumption of fossil fuels and created awareness among participants regarding the growing issue of climate change due to increased Carbon Dioxide emissions.

“The major problem human beings are facing now is nothing other than climate change. Emission of carbon dioxide is one of the main reason behind the drastic climate change which human beings are witnessing over the past 100 years. One of the primary reasons behind the rising carbon dioxide emissions is the consumption of fossil fuels. Due to this anti-environmental act of humans, global warming is increasing, and it is negatively affecting the overall stability of the planet,” said Prof.Chetan Singh Solanki.

Prof.Chetan Singh Solanki has traveled across 25 cities in India on a solar bus to proclaim the vitality of using solar energy in the future. During the talk, he shared experiences of his journey and made it clear that the future of every country will be directly dependent on how they create energy in a self-sufficient manner without creating negative impacts on planet earth.

Seven Faculty Members and an alumnus of Central University…

“Sun, as we all know is the only unending source of energy available to humans. I strongly believe that idealizing and materializing a concept like ‘EnergySwaraj‘is necessary for the overall growth of the country. Energy Swaraj is not just generating and using energy using renewable sources. It is ultimately a sustainable economic model that centers primarily around energy. The concept of ‘ Energy Swaraj‘aims to offer sufficient energy to people in the country irrespective of rich and poor,” added Prof. Solanki.

The event was chaired by AICTE chairman Professor Anil D Shasrabudhe and was co-chaired by the member secretary of AICTE Rajive Kumar, and AICTE Vice Chairman Dr. MP Poonia.

During the speech, Prof. Anil D Sahasrabudhe said that interactive talk sessions from eminent visionaries like Professor Chetan Singh Solanki could help people understand the vitality of embracing solar energy in the future. He said, ” Energy Conservation is the best gift we can give to our future generations. ”

“As the increased consumption of fossil fuels is drastically affecting the stability of planet earth, and is contributing to climate change, the only way to survive and assure the health of the blue planet is by using the sun for energy needs. I believe Chetan Singh Solanki is the best person who can talk about Energy Swaraj in India, and we are glad to bring him to a session organized by AICTE. I solemnly urge all of us who are present today to take a pledge to save and conserve energy, as it the only alternative to save our planet,” said Sahasrabudhe.

AICTE member secretary Rajive Kumar said, “Most of the countries are now aware of the fact that the most challenging problem faced by humanity is climate change. The concept of Energy Swaraj is very vital for a country like India where people will start generating and consuming energy themselves,” said Rajive Kumar.

“When the world is trying hard to find ways to curb the usage of fossil fuels, an initiative or mission like Energy Swaraj has a huge significance. Energy Swaraj, in the future, will reshape the way in which Indians generated and used energy,” said AICTE Vice Chairman Dr. M.P Poonia.