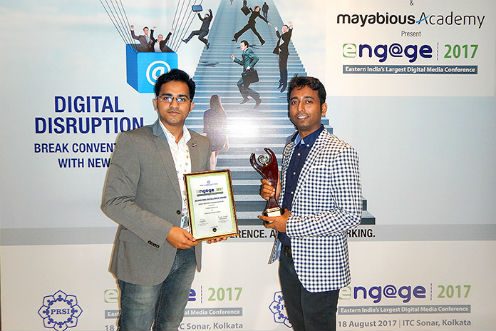 Kolkata​: Innofied Solution Pvt Ltd, a leading web and mobile app development company in
Eastern India bags the prestigious Engage Digital Summit Award 2017 for the second time in a row. For the category Mobile Application Development & Use, Innofied emerged as the winner for their transport app solution called AllRideApps.
Engage​ ​Digital​ ​Summit​ ​Award​ ​2017​ is one of the popular category presented by Public
Relations​ ​Society​ ​of​ ​India,​ ​Kolkata​ ​Chapter.​ On August 16, they announced us victorious in
the above mentioned category for our unique transport solution. AllRideApps, the home-grown transport solution platform of Innofied that brought awesome results, popularity and bagged some great clients in just 10 months, emerged victorious and made us proud.
Swarnendu De, Co-Founder of Innofied congratulated the whole team saying, “We did it again.
Our hard work has bore fruits. Out of many products and solutions we have this was dear to us, and we have together put all the strength to win this award.” Yes, we do have our expertise in web and mobile app development, but this award demands how engaging was your business in a short period of time. We emerged winner among many tough contenders. There were other categories and winners such as Indus Net Technologies, Tata Interactive Systems , Max Mobility and number of other promising and popular IT organizations has been awarded.
Held on 18th August, 2017 at ITC Sonar, Kolkata, it was a great day and big honour for Innofied to accept this award in person. Swarnendu De and Sandip Saha, Innofied’s CEO and CoFounders received the award from Nivedita​ ​Banerjee​, Secretary General of PRSI. Chief Guest of the show was Mr.​ ​Debasish​ ​Sen​, Additional Chief Secretary, Information Technology & Electronics Department, West Bengal.
Sandip​ ​Saha,​ ​Co-Founder​ ​of​ ​Innofied​ said, “For a second time in a row we won this award
and it is a reflection of the great team effort.” “We hope to win more in the coming years.”
There was a series of Digital Marketing Speaker’s session followed after the Award ceremony which was equally engaging and helpful to the audience. It was a grand day of celebration for Innofied.

Enrol with scholarships and bursaries up to 25 % at Deakin University, Australia