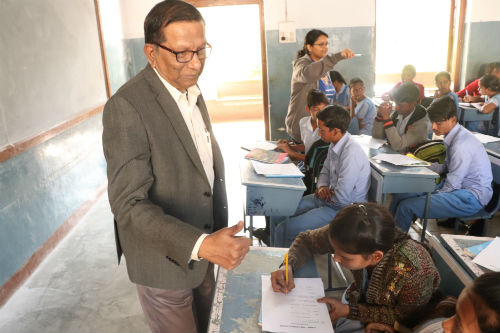 Jamshedpur: Samarthya is a student-run body in XLRI which was founded to help school students achieve their true potential. Samarthya wishes to make student so empowered that they wouldn’t need handholding, so independent that they can choose their preferred door of opportunity. The theme for this year, ‘Education for all’ falls in line with the motto of the larger organisation, XLRI, this committee is a part of, ‘For the Greater Good’.

2018 is the second consecutive year of English Fair which took birth from the idea that no student deserves to have an opportunity snatched from him/her just because he/she is not familiar with a language. English Fair was held on 20th January 2018 at Loyola High School (Hindi), Jamshedpur. The event saw participation from a total of 210 students from 7th, 8th and 9th classes. The entire lot was divided into groups of 6, with one team leader who took the group around, visiting each stall.

This year, the students of Samarthya prepared many small fun events that would start to get rid of the thinking process that English, as a language, is something to avoid or run from if any break comes draped in the language. The English language is an important medium of communication, the knowledge of which will ensure that future rejections do not happen because of ‘communication problems’. There were only 2 overarching ‘nots’ at English Fair – ‘Do not be afraid to try or make a mistake’ and ‘Do not shy away from asking questions or learning’. Beyond that, give your best!

The focus of English Fair was increasing familiarity with the language through the means of fun events. Just a Minute played out in its normal form; another version of it had a twist – speak for a minute about a photograph that is shown to you, talking about what you have seen or what it reminds you of. Sentence Chains was a simple way of linking sentences and changing the tenses as the sentence grew longer. A quiz checked the students’ competency with spellings, grammar and understanding of the convoluted language of riddles. Draw as directed, fondly called DaD, had 4 students describing the shapes in the photograph shown, without explicitly giving out the name of the object. Games like Mirroring and Courtesy Café was designed to familiarise he students with the norms of the language like, “Hi! How are you”, “Hello, I am good. Thank you for asking. What about you”, “I am doing great! A pleasure to meet you”. Tongue Twister was the stall where you got to see the young kids get competitive. The last stall encouraged the group to ask questions in English to their friend in a game of 20 questions.

Students were seen frowning and thinking of what words or phrase to use. We ensured that they were given immediate feedback on all things they spoke and personal attention as it was needed. Just 25 XLRI students were able to touch the lives of 210 students who felt much more confident today to try their hands at speaking English again. In fact, some of the students asked if Team Samarthya could make it a monthly event as they found this to be a fun way of learning! The victorious smiles on their faces when they got a question right or correctly remembered a word is what will encourage Samarthya to include more students under the ambit of English Fair in the years to come.