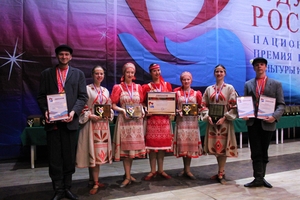 The ensemble won the National Prize for the performance of “Ancient Karelian Dance”.