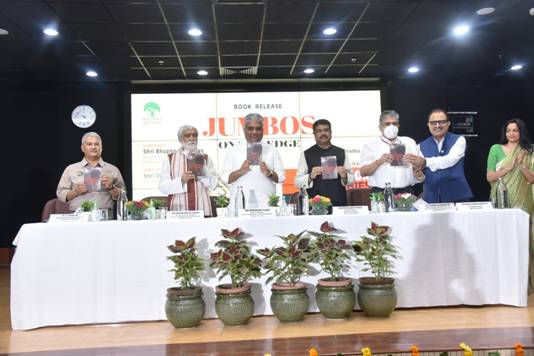 Environment Ministry not an obstacle but an enabler, a solution towards sustainable growth and development: Bhupender Yadav

New Delhi: Minister for Environment, Forest and Climate Change, Shri Bhupender Yadav today said that the focus of the government under the leadership of Prime Minister, Shri Narendra Modi is not just increasing the tree and forest cover in the Country quantitatively but more importantly qualitatively.

Shri Yadav was speaking at the launch of “Jumbos on the Edge: The Future of Elephant Conservation in India” a book by Shri Sanjeev Kumar Chadha, an Indian Forest Service officer currently serving as Managing Director of National Agricultural Cooperative Marketing Federation of India Ltd.(NAFED). Shri Dharmendra Pradhan, Union Minister for Education, Skill Development and Entrepreneurship also graced the occasion.

Speaking on the Human-Elephant conflict and the measures taken by the Project Elephant division with Elephant range states, Shri Yadav emphasized on people’s awareness and participation as a crucial step in managing and conserving both flora and fauna of the country while ensuring life and livelihood.

“Environment Ministry is not an obstacle but a solution provider” , said Shri Yadav while elaborating on the role played by Ministry of Environment as an enabler of sustainable growth and development and congratulated the author who having spent a lifetime in the forests across India has brought those learning’s and research together in the form of an book.

Minister for Education and Skill development, Shri Dharmendra Pradhan recollecting incidences of human elephant conflict from his native state of Odisha stated that the case studies the suggestions brought forward in the book will help all stakeholders involved to incorporate in their existing and future implementation for a more holistic approach to development.

Indian Elephant (Elephasmaximus) is a keystone species andan integral component of ecosystems playing a crucial role in maintaining forest ecosystem and biodiversity. It has been recognized as National Heritage Animal of India and highest degree of protection has given under Indian Wildlife Protection Act (1972). India has the largest population of Asian Elephants with 30000 wild and about 3600 captive elephants.

Human-elephant conflict is a major conservation concern in elephant range states in India and emerged as one of the most challenging problems for elephant management and conservation in recent times. Human-Elephant Conflict (HEC) refers to the negative interaction between people and elephants, leading to a negative impact on people or their resources such as human death and injury, crop damage, loss of property, apart from affecting their emotional well-being, and on the elephants or their habitats.

The Ministry has taken several steps to address the issues. Some of the major ones are:

The Ministry’s provides financial assistance to States/UTs under the Centrally Sponsored Schemes of ‘Project Elephant’ for management of wildlife and its habitats in the country.
Direction has been given to all the States/UTs that linear infrastructure project proposals for consideration of the Standing Committee of the National Board should be accompanied by animal passage plan prepared as per the guidance document, ‘Eco-friendly Measures to Mitigate Impacts of Linear Infrastructure’ on wildlife.
Through revised guidelines of the Pradhan Mantri Fasal Bima Yojana,States have been given option to consider providing add-on coverage for crop loss due to attack by wild animals.
In order to mitigate the Human Elephant Conflicts in the trans-boundary areas, the Government of India entered in to series of dialogue with Bangladesh which resulted in Protocol on Trans-boundary Elephant Conservation between Republic of Bangladesh and Republic of India. The protocol was signed between two countries in the India- Bangladesh virtual summit on 17th December 2020 to facilitate smooth movement of elephants between India and Bangladesh and vice versa.
An Advisory was issued to deal with human wildlife conflict to States/UTson 6th February 2021.
Comprehensive guidelines issued for Human Elephant Conflict mitigation in 2017. All the elephant range states have been directed to implement the Guidelines for Management of Human Elephant Conflict issued by the Ministry on 6.10. 2017.
Enhancement of Ex-gratia compensation for the loss of life due to human animal conflict from Rs. 2 lakhs to Rs. 5 lakhs.
The Elephant Task Force constituted by the Ministry suggested 32 Elephant Reserve in the Country in which 30 Elephant Reserves have already been declared in the country.
Ministry’s supports State Government to set up more rescue and rehabilitation center for elephants.
Standard Operating Procedure (SOP) for Dealing with Captive and Wild Elephant Deaths due to Anthrax/Suspected Cases of Anthrax has been released.
The Ministry has been working with lining departments like Ministry of Power, Ministry of Road and Transports, Ministry of Railways and Ministry of Agriculture for minimizing Human Elephant Conflict in the Country.

Union Minister Dr Jitendra Singh says, Government will be setting up Science Museums across the country