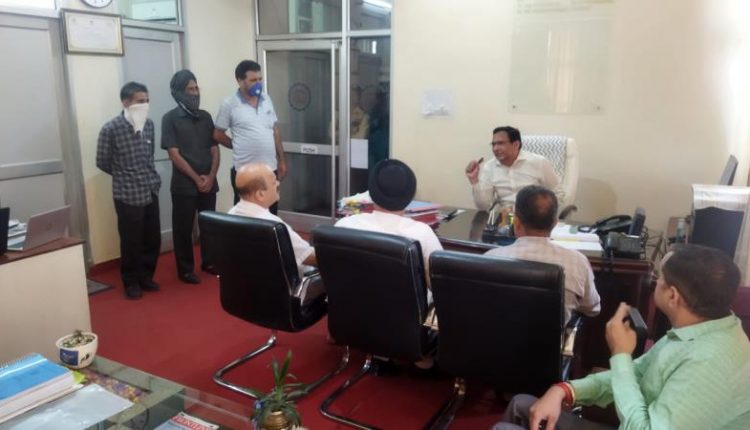 By India Education Diary Bureau Admin On May 11, 2022
Share

The EPFO is servicing the entire area from Jammu & Kashmir and Ladakh with regard to settlement of claims, redressal of grievances, and facilitating stakeholders and so on.

Considering the large number of grievances and to ensure prompt service delivery, several online initiatives of EPFO such as balance enquiry, filing of online claims including transfer and advance claims and members’ basic details were explained with hands on demonstration.

One of the employees Mukesh Gupta visited office with the grievance that his claim is getting rejected due to difference in father’s name. Rizwan Uddin, Regional P. F. Commissioner-I, directed the concerned official to update the same immediately and accordingly the requested corrections were done.

Dimple Kumar, an employee of M/s. Hotel Asia was not having his UAN details. Using the IT tools of EPFO, UAN of the member was traced out and provided to the member. Mohammad Bashir was not able to avail EPFO services as his UAN was not activated, the matter was taken up and his UAN was activated immediately. Brijlal Verma, an employee of M/s. Saraswati Agro Chemicals (India) Pvt. Ltd. appeared with a request to get modifications in his UAN regarding Father’s name and Date of Joining, the PF Commissioner Rizwan Uddin directed Arun Kumar, Sr. SSA to process the request immediately.

Employer representative of M/s. Sai Santosh appeared with a request to update records of their employees in their UAN as the establishment was not able to file ECR due to non-linkage of Aadhaar. Directions were given by PF Commissioner to Subhash Chandra, Sr. SSA to process the request immediately.

Employee representatives of M/s. JKSRTC appeared with the grievance that employees of their establishment are not able to withdraw their PF amount. Rizwan Uddin, RPFC-I, explained to them that the issue is being faced due to some technical snag and the matter is already forwarded to the Head Office for resolution and is also being regularly followed up. He further assured them regarding resolution of the issue at the earliest.

The endeavor of “Nidhi Apke Nikat” programme was to redress the maximum number of cases/grievances the same day or at the earliest.