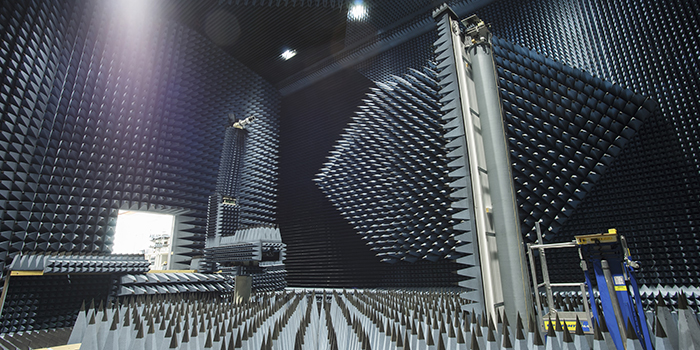 The European Space Agency, ESA, is building new weather satellites to obtain all necessary data for daily weather forecasts both in Europe and around the world. The satellite programme goes by the name MetOp (Meteorological Operational satellite programme), and the many observations of temperature, wind,ice cover, and soil water content are also included in the climate models.

An important component of the satellites is a radar system with antennas which sends the radar signal in the right direction towards the ground where it is then reflected and detected again by the antenna. Before the satellites are sent into space, it is necessary to have a very precise knowledge of how the radar signal is affected on its way through the antenna, so that this can be taken into account when processing data from the measurements. And the necessary tests of this must be carried out in the anechoic room at DTU—‘DTU-ESA Spherical Near-Field Antenna Test Facility’.

“Each test lasts about four weeks. Antennas are very sensitive and are affected by the tiniest details such as a soldering that has not been done correctly. We’ve experienced this in previous projects, but we expect that this time everything is correct and that after testing the antennas can be returned ready for installation on the satellite,” says Professor Olav Breinbjerg, Head of DTU-ESA Spherical Near-Field Antenna Test Facility.

It took several years of preparation and upgrading of measuring instruments for DTU’s anechoic laboratory before final approval to carry out the tests of the satellite antennas was given by ESA and Airbus—the producers of the new so-called scatterometers which the antennas form an essential part of.

The antennas are so-called flight hardware—i.e. the right antennas that will later be mounted on the satellite which will now be tested at DTU Electrical Engineering. The first antennas arrive on 2 February, after which they will be unpacked by staff from Airbus and installed in the laboratory.

Tests conducted by dedicated specialists
Like so much else, the project has been delayed by COVID-19 and most recently by a failure in one of the key instruments in the laboratory. Now, however, everything is ready to carry out the extensive tests that represent the largest task in the laboratory’s history.

“So far we’ve been two people responsible for carrying out this type of measurement that requires very sophisticated specialist knowledge. Over the last few years, we’ve trained two more colleagues, so we are ready to complete the task that will take place around the clock from the moment the measurements are started until they are completed,” says Olav Breinbjerg.

A number of new instruments and more complex measurements are included in the task which has not previously been carried out at DTU—in particular multi-frequency measurements that require greater speed of the system. It is therefore with slight trepidation that Olav Breinbjerg is looking forward to the laboratory’s biggest task to date.

A total of three antennas will be tested to be mounted on the first MetOp satellite to be sent into orbit in 2023. The test of each antenna will take about a month and the entire task is expected to be completed in May.

In 2022 and 2023, the antennas for the last two satellites of MetOp Second Generation are scheduled to be tested at DTU.