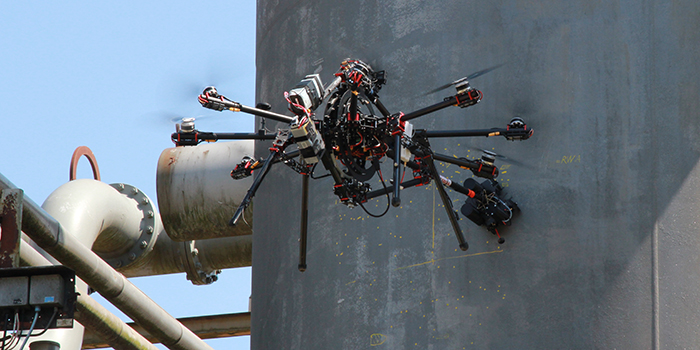 By India Education Diary Bureau Admin On Jan 15, 2021
Share
Under the auspices of a major new EU project, 15 young researchers are to be trained to develop drones for small flying robots that can maintain wind turbines, bridges, and other important infrastructure.
Related Posts

Over the next three years, a total of 15 PhD students will be trained to develop intelligent flying robots through a new Marie Skłodowska-Curie Innovative Training Network. The aim is for drones to be able to inspect infrastructure such as bridges, wind turbines, or large factories—and perform various maintenance tasks.

“In other words, the flying robots will be able to operate with both sensors and robotic arms so that not only can they observe a crack, for example, but also repair it,” says Associate Professor Matteo Fumagalli, DTU Electrical Engineering, who is leading the large project.

AI and collaboration
Scientifically speaking, there are three main research pillars. The first one is intelligent mechatronics which combines mechanics, electronics, and information technology. The other two pillars are the AI for aerial robots and collaboration between humans and robots.

“The drones must be developed so that in future they can fly near the infrastructures while precisely manoeuvring a tool with a robotic arm. In addition, its ability to function as an autonomous system must be strengthened, as it will not be controlled by a human pilot, but must be able to manoeuvre around itself—even in challenging conditions such as in poor light or windy conditions, where it can be difficult for the flying robot to precisely perform a maintenance task,” says Matteo Fumagalli.

There are also two major research tasks, both in terms of equipping the drone with artificial intelligence—and in understanding how new technologies such as augmented and mixed reality can be used in human-machine communication with flying robots.

The idea is for the drone to operate in cooperation with a human expert who—during the drone’s operation—can assess the damage it finds and then instruct the drone on how to carry out maintenance.  This places high demands on the effectiveness of human-drone communication.

Only the best
Several companies are involved in the project as partner organizations. One of the objectives is to fill the gap that currently exists between the needs of industry and the research that has so far taken place in this area.

The project has just got underway and its immediate priority will be to find the 15 new PhD students. A total of three of the new young researchers will be affiliated with DTU.

“A Marie Curie PhD project is very prestigious in the research world and one of the best accolades you can have. We therefore expect to be able to hire some of the world’s brightest young minds in the coming months to carry out the research tasks associated with the project,” says Matteo Fumagalli.

The 15 PhD students will undergo a comprehensive training programme where they will learn about the various technologies needed to complete the task.