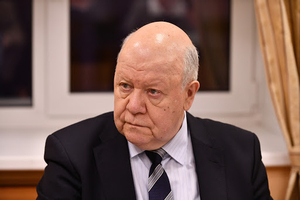 On December 15 the jubilee seminar “Euroregion Karelia – 20 years of cooperation” was held in the mode of video-conference communication.
Over the long history of its existence, the Karelia Euroregion has established itself as an effective tool for building a dialogue between the Karelian and Finnish sides, as well as defending the interests of the border regions at the highest level.

The seminar “Euroregion Karelia – 20 years of cooperation” was held online. You could connect to the broadcast on the YouTube channel.

More than 120 people took part in the seminar on both sides of the border.

The Minister of Foreign Affairs of Finland Pekki Haavisto, the Minister of Foreign Affairs of the Russian Federation Sergey Viktorovich Lavrov and the Head of the Republic of Karelia Artur Olegovich Parfenchikov addressed the participants with welcoming words. The ministers highly appreciated the results of the Euroregion’s activities and wished interesting discussions.

Valery Shlyamin , Doctor of Economics, Advisor to the Administration, Scientific Director of the Institute of Northern European Studies of PetrSU, one of the founders of the Euroregion, analyzed the results of its activities and formulated a number of project initiatives in the report “Euroregion Karelia as a Model of Cross-Border Cooperation”.

A rather lively discussion took place at the seminar, in which, in particular, the first co-chairs of the Euroregion Executive Committee, Dr. , cultural figures.

As you know, since the establishment of the Karelia Euroregion, Petrozavodsk State University has annually taken part in many joint projects. PetrSU and today continues to be the intellectual center of cross-border cooperation of the republic.