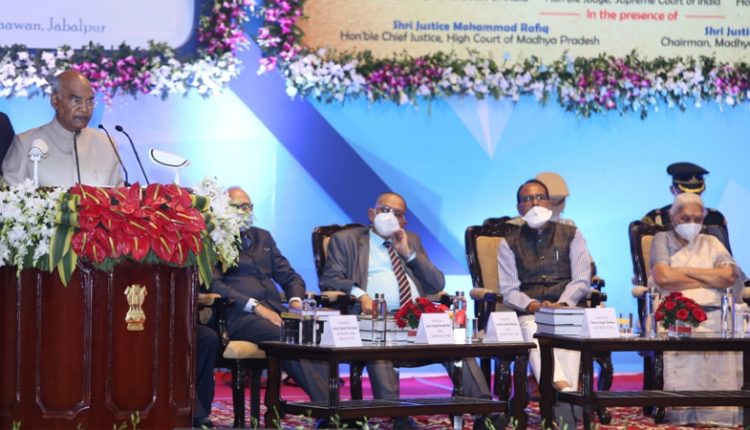 Bhopal : President Shri Ram Nath Kovind said that we will have to make efforts to provide quick, accessible and affordable justice to the people of the country. For this, we will have to work towards providing justice to people in their own dialect and language. President Shri Kovind was addressing the inaugural session of All India Judicial Academies’ Directors Retreat organized at Manas Bhawan, Jabalpur on Saturday.

President Shri Ram Nath Kovind said that lower courts are integral part of the judicial system of the country. Our judicial academies are doing the important work of training the law students having theoretical knowledge as skilled and excellent judges. The need now is to expand the scope of the training of judges as well as other judicial officers to expeditiously settle pending lawsuits in the country’s courts, especially in district courts.

President Shri Kovind said “I am fortunate to get the opportunity to serve the country with all the three branches of the state, the legislature, the executive and the judiciary. I am happy that on my suggestion, the Supreme Court, working in this direction, provided the translation of its decisions in nine Indian languages. Everyone associated with this effort deserves to be lauded.”

President Shri Kovind said ” I want all the High Courts to provide and publish certified translation of decisions related to important aspects of public life in the official language of their state, like the Supreme Court, so that the plaintiff-respondents should not be inconvenienced in understanding the decision due to the limitations of language. He said that the Preamble of the Constitution of India is considered the soul of our Constitution. It expresses the resolve to achieve four ideals – justice, freedom, equal opportunity and fraternity. Among them also, ‘justice’ has been mentioned first.

President Shri Kovind said that more than 18 thousand courts have been computerized in the country. During the period of lockdown till January 2021, around 76 lakh cases were heard in virtual courts across the country. Also efforts like National Judicial Data Grid, Unique Identification Code and QR Code are being appreciated globally. While judicial-administration has become easier now, with the help of e-Adalat, video conferencing, e-processing, e-filing and e-seva centers, reduction in use of paper has made preservation of natural resources possible.

President Shri Kovind said ” I am happy to be here with you on the holy land of Narmada, which is the lifeline of Western India and Madhya Pradesh and which has given special recognition to Jabalpur. Rishi Jabali’s Tapobhumi and witness to the valour of Rani Durgavati, Jabalpur region has natural wealth and historic and archaeological heritage of Bhedaghat and Dhuandhar. Jabalpur, which preserves and honours education, music and art, was honoured by Acharya Vinoba Bhave by naming it as ‘Sanskardhani’. The main branch of Madhya Pradesh High Court established in the year 1956, gave special recognition to Jabalpur. He said that this programme is a commendable effort to share the process to be adopted for continuous judicial training among all the state judicial academies of the country. “Therefore, I am delighted to have inaugurated this All India Conference of Directors of State Judicial Academies.

Governor Smt. Anandiben Patel said that the judiciary is the most valuable institution in the country. Every Indian is proud of the judiciary. She said that even in the time of the Covid-19 pandemic, the judiciary did not allow justice to be interrupted. This work of the judiciary is laudable. Smt. Patel said that the importance of training for excellence and skill development in any field is well known. She said that trainees of academies should be motivated to make best use of technology to meet the challenges of speedy justice. At the same time, the trainees should be motivated to develop the ability to work in harmony with artificial intelligence and human conscience and to prepare for the challenges of changing times including data security, cyber crime etc. and also for innovations.

The Governor said that if the position of women in any society is strong and respectable, then the society will be also firm and strong. After a long time, women now have a place in society, the situation of women is changing. This is positive, but its pace must be accelerated. Academies must lay emphasis on making efforts to include gender sensitization during the training programme.

Governor Smt. Patel said that as a minister in the Department of Women and Child Development in Gujarat, she had taken the initiative of resolving family disputes through a women’s group. Under this, arrangements were made to aware women about their rights by forming group of 8-10 women in the form of a women’s court. In the case of domestic violence, these women would hold discussions with the victims and their family members and collect necessary information to resolve their disputes. “I formed a committee of distinguished citizens and settled matters with their cooperation so that women have not to bother to attend court hearings”, she said. This experiment was so effective that women courts were held twice a month, and women started coming to the courts with their grievances. Therefore, it is necessary that the judicial process should be conducted with a more sensitive, balanced and firm approach towards women in cases of sexual violence.

Chief Justice of Supreme Court Shri Sharad Arvind Bobde said that today’s programme is the beginning of a new process. Dialogues set new dimensions and today we are starting similar type of dialogues. Justice is a remarkable process, it is necessary to understand human nature, social environment, political system for justice. Also, it is important to understand the law that develops over time. He said that later, a judicial academy was established, which is doing excellent work, but the methods of judicial training will have to be changed. “In my view, a dialogue will be set with the All India Judicial Academy Director’s Retreat so that we can achieve excellence through sharing of experiences.

Chief Minister Shri Shivraj Singh Chouhan cordially welcomed President Shri Ram Nath Kovind and Chief Justice Shri Sharad Arvind Bobde along with other judges on behalf of the 8 crore people of the state. He expressed the hope that there whould be valuable exchange of views in the All India Judicial Academy Directors Retreat organized by the State Judicial Academy, and the conclusions of which will be effectively implemented by the Madhya Pradesh government and the High Court. Expressing concern over the large number of pending cases in the courts, Chief Minister Shri Chouhan said that efficient judges and human resources are required to provide quick, affordable and accessible justice to the people. He said that the soul gets happiness by justice in the true sense of the word. He said that the judiciary of India enjoys the reputation that every citizen is confident that he will get justice at all costs. In his welcome address, Chief Justice of High Court Jabalpur Shri Mohammad Rafiq described the All India Judicial Academy Directors Retreat Conference organized by the State Judicial Academy and High Court Jabalpur as a unique initiative.