As a child growing up in the Democratic Republic of Congo, Michel Chikwanine endured unspeakable horrors of war. He witnessed the torture of his father – a human rights lawyer who was eventually murdered due to his political beliefs – and the rape of his mother. He was forced to become a child soldier at age five and a refugee at age 11.

Yet, Chikwanine retains hope for the future and a belief in positive change. He’s an activist, motivational speaker and leadership facilitator with organizations ranging from the Office of the United Nations High Commissioner for Human Rights to the Romeo Dallaire Child Soldiers Initiative.

His inspiring journey and his tireless advocacy for peace and human rights were recently recognized with a Global Impact Award presented by the University of Toronto African Alumni Association during its annual African Scholars Awards ceremony. For Chikwanine, who earned a bachelor of arts specialist degree in African studies from U of T and co-authored a graphic novel, Child Soldier: When Boys and Girls Are Used in War, the award served as motivation to continue to work towards the betterment of society.

“As my father always said before he died – he always reminded me that great men and great women throughout history have never been praised for their money or their success, but rather for their heart and what they do for others,” Chikwanine said during the virtual event last last week.

“So I ask all of us – alumni and every part of this community – to be great, with great hearts to make this incredible life and incredible continent that we have be the best that it can be.” 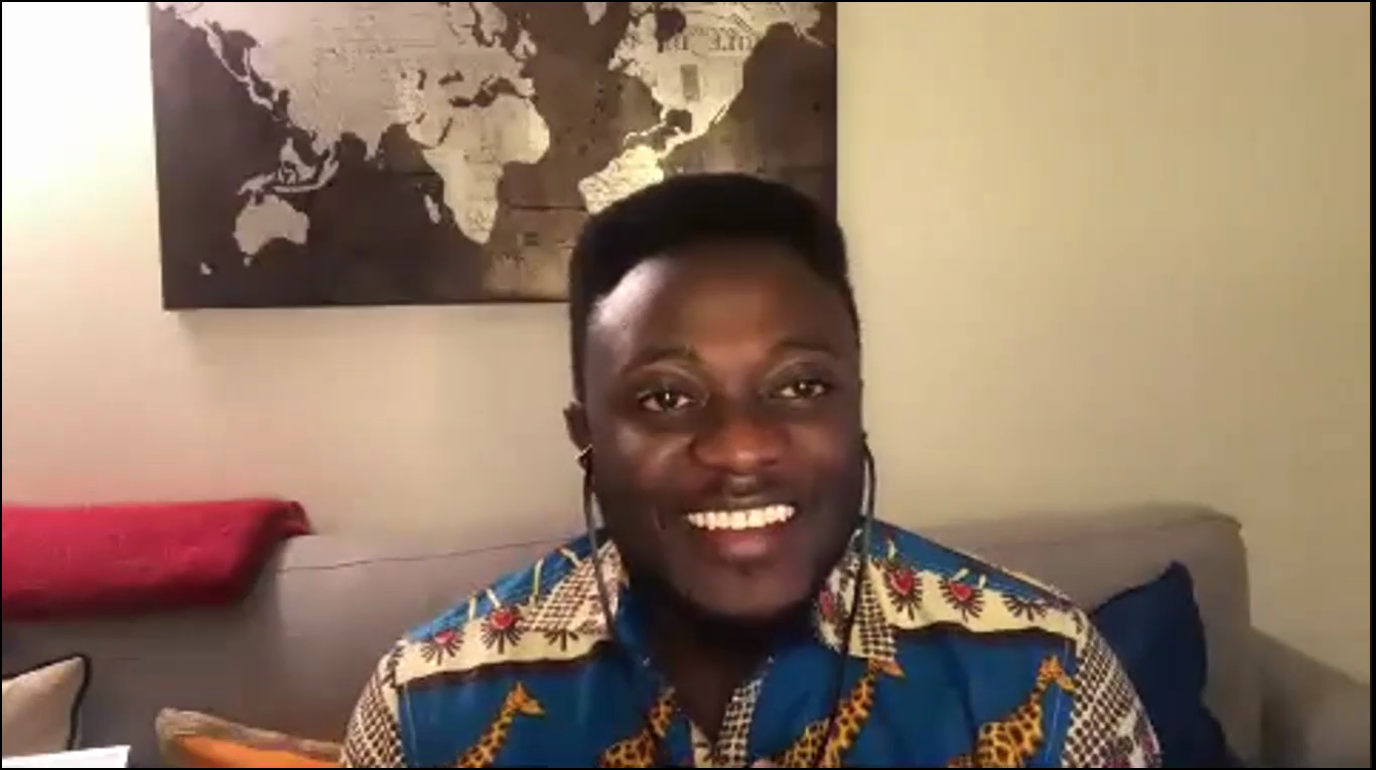 Michel Chikwanine, an activist, motivational speaker and leadership facilitator, was recognized with a Global Impact Award.

Created by a group led by Henry Ssali, the founder and executive director of the African Alumni Association, the African Scholars Awards ceremony saw 16 U of T alumni, faculty and staff recognized for their contributions in realms ranging from academic achievement and social innovation to community development and volunteering. The recipients included Akwasi Owusu-Bempah, an assistant professor of sociology at U of T Mississauga, Associate Professor Antoinette Handley, chair of the department of political science in the Faculty of Arts & Science, and Karima Hashmani, U of T’s executive director of equity, diversity and inclusion.

Recent graduates Entisar Yusuf, who founded the Black Graduate Students Association, and Jeffrey Fasegha, who was recently named a Rhodes Scholar, were also recognized (see the full list of recipients below).

David Palmer, U of T’s vice-president, advancement, hailed the award recipients as “exceptional role models” who serve as examples for the current cohort of U of T students.

“I’m always delighted in my role to acknowledge outstanding alumni, especially after reading the biographies of this year’s recipients. I can tell that you are all making a positive difference through your professional excellence, academic achievements and your volunteer contributions to your communities,” Palmer said.

“The university itself has a strong commitment to supporting African students and programs, increasing its ties with African universities and expanding the number of international students from Africa,” he said. 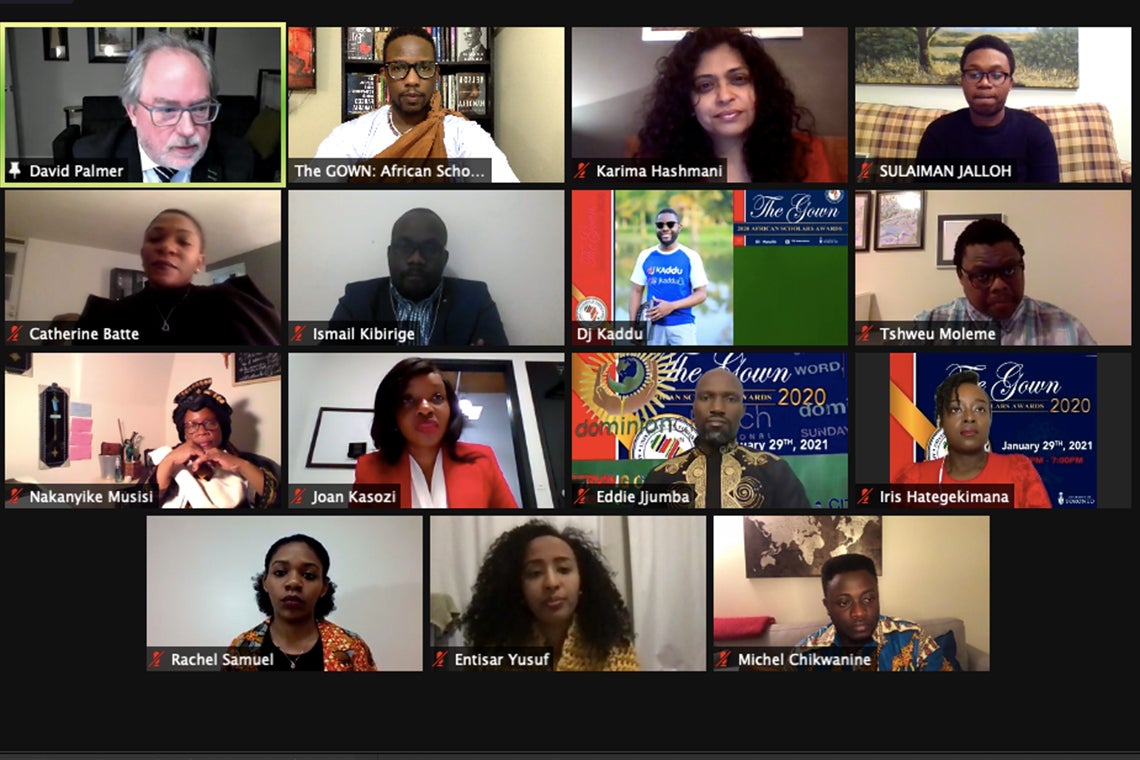 David Palmer (top row, far left), U of T’s vice-president, advancement, and Henry Ssali (top row, second from left), who works in the president’s office and is the founder and executive director of the African Alumni Association, are joined by recipients of this year’s African Scholars Awards (image via Zoom)

Rachel Samuel is one such example. She came to U of T from Malawi – where she grew up in a refugee camp – as part of the World University Service of Canada Student Refugee Program. She went on to receive a Queen Elizabeth II Diamond Jubilee Scholarship on her way to earning a bachelor of science degree in human biology and anthropology. She later graduated with a master of public health from Queen’s University.

Samuel, who is currently working on a research project on refugee health and mental health at York University, was one of four recipients of the Outstanding Recent Alumni Award.

“My passion for saving refugee populations really stems from my childhood, so I’m very humbled and happy to be a part of this team that is inspiring and motivated to make a difference,” said Samuel, who is originally from Rwanda.

“To me, this award is an indication that we are all destined to do great things in our communities and society at large, despite our circumstances. This causes me to reflect on my journey and really understand that my thoughts and dreams should never be limited by my circumstances.” 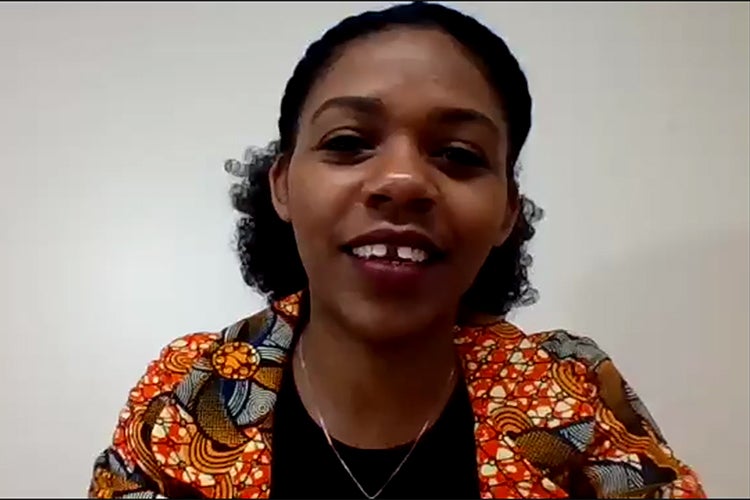 Rachel Samuel, who grew up in a refugee camp in Malawi, earned a bachelor of science degree from U of T and is now working on a research project on refugee health and mental health at York University. She was one of four recipients of the Outstanding Recent Alumni Award.

While Chikwanine and Samuel represent the recent generation of outstanding African alumni from U of T, the African Scholars Awards also acknowledged the achievements of a luminary whose ties with the university go back decades: noted Ugandan psychiatrist Seggane Musisi.

Musisi, who did his specialist post-graduate training in psychiatry at U of T in the early 1980s and was the first Black chief resident at Toronto General Hospital, was recognized with a Global Impact Award for his pioneering research and practice. His areas of specialization include the impact of war and conflict on mental health, HIV/AIDS, mental health of orphans and vulnerable children, dementia and traditional mental health care in Africa.

“I’m honoured to receive this award and to be amongst so many distinguished people and friends of mine,” said Musisi, a professor of psychiatry at Makerere University College of Health Sciences and senior consultant psychiatrist at the Mulago National Referral and Teaching Hospital and Uganda Ministry of Health in Kampala.

“I don’t know what to say, except to encourage – especially young Africans – to continue working and impacting not only where you are, but more specifically Africa, so that we don’t keep lagging behind despite the many resources and talent that we have on this continent.

“I believe the problems we have in Africa are solvable if only we dedicate ourselves to their solutions. Wherever you are in the diaspora or on the continent, always make sure you give something to better the continent.”

Musisi also thanked U of T for supporting his training in psychiatry and enabling him to “use that knowledge to impact mental health care in Canada, later in Uganda and elsewhere in Africa.”