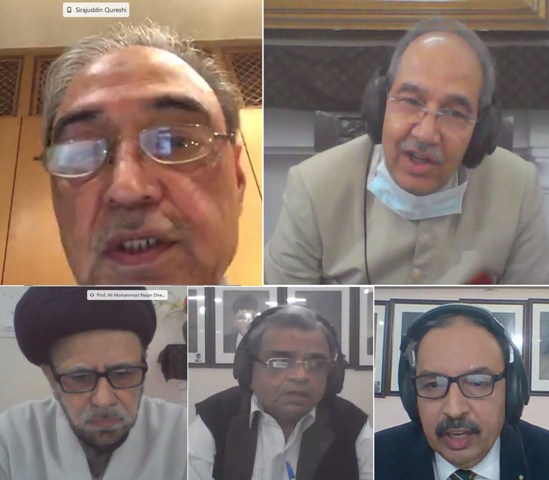 Aligarh: Pictures and historical records showcasing Aligarh Muslim University (AMU) founder, Sir Syed Ahmad Khan’s life, contribution to educational and social reforms, description of various stages of Muhammadan Anglo Oriental (MAO) College to the establishment of AMU in 1920 and several other artefacts will be displayed at a New Delhi based new museum.

The announcement to open a new museum dedicated to Sir Syed Ahmad Khan was made by eminent entrepreneur and President of the India Islamic Cultural Centre, Mr Sirajuddin Qureshi in the valedictory function of AMU Centenary International Webinar on ‘The Establishment of Aligarh Muslim University and its Achievements (1920-2020)’ organised by the Sir Syed Academy.

Mr Qureshi added: “Sir Syed was not just an ordinary educationist, historian, author and jurist but an extra-ordinary reformer, secular nationalist and one of the most important architects of modern India. People in Delhi should be provided with unfettered access to life and works of Sir Syed exhibited in an advance museum.”

“We will provide Mr Qureshi with all the necessary help and cooperation for the museum project,” said AMU Vice Chancellor, Prof Tariq Mansoor.

Delivering the presidential remarks in the online valedictory function, Prof Mansoor propounded, “Sir Syed’s memory is not only for AMU, but for the whole Nation.”

He pointed out that around 45-50 papers on AMU achievements in various streams have been presented in the two-day webinar. The proceedings of the programme will also be published in a book.

The Vice Chancellor further said that exemplary work has been carried out in the Sir Syed Academy including publishing of books related to AMU history to commemorate the centenary year.

“We also have plans to begin Ph.D programme in the Sir Syed Academy,” said Prof Mansoor.

Dr Mohammad Shahid, Deputy Director, Sir Syed Academy introduced the guests and spoke on the history of AMU from the inception of MAO College to the modern day centre of learning. He also extended the vote of thanks to all the guests.