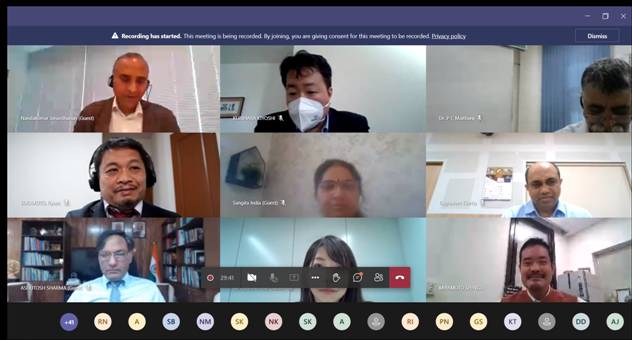 New Delhi: Eminent Experts, Scientists, and Technocrats from India and Japan discussed the most recent innovations, trends, concerns, and solutions adopted in the field of decarbonisation and promotion of Hydrogen based technologies at the India-Japan Webinar on De-carbonisation: Exploring the Hydrogen Prospects and Innovative Technologies.

His Excellency Mr. Sanjay Kumar Verma, Ambassador of India to Japan, said that 38% of India’s total installed electricity generation is based on renewables. This is about 136 Giga Watts now, and we expect to reach a target of 175 GW by next year and 450GW by 2030. Therefore, he said that hydrogen can play a critical role as a clean fuel in achieving this ambitious goal.

“Japan is the first country to formulate a basic hydrogen strategy. Hydrogen is included in the fifth Energy plan of Japan. The country thus has a good ecosystem for R&D and commercialization, which could be used by the Scientific and Commercial Communities of the two countries. India and Japan have strategic relationships, and this has to be elevated to a strategic partnership enabling sharing of knowledge without any inhibition on Hydrogen and utilization of H2 in future,” he pointed out.

Mr. MIYAMOTO Shingo, Minister, Head of Economic Section, Embassy of Japan, New Delhi, underlined that in japan, companies like Toyota have already operationalised commercially available hydrogen-powered vehicle, and this is much more than a simple electric-powered vehicle.

“India & Japan are in a very good position to work together in the area of producing eco-friendly hydrogen, for example from bio-fuel with a possibility of the two countries cooperating in this area is huge,” he added.

“This means that India has to look at energy storage options which are green, unlike batteries and Hydrogen certainly is a very good candidate, he said.

The webinar jointly organized by the Embassy of India in Japan, Department of Science & Technology (DST), Government of India along with The Institute for Global Environmental Strategies (IGES), Japan, and The Energy and Resources Institute (TERI), India, on 19th April 2021 brought together several experts in the field from the two countries.

“Hydrogen has a potential role to play in major sectors in India. Given the scale of future demand, India should be proactive in manufacturing electrolysers to produce green hydrogen. A greater cross-sectoral coordination between the governments can help realize the economy benefits of hydrogen fuel. The key industries need to come together to catalyse decarbonisation allowing risk-sharing and minimizing the burden at the individual company level,” said Dr Vibha Dhawan, Director General, The Energy and Resources Institute (TERI).