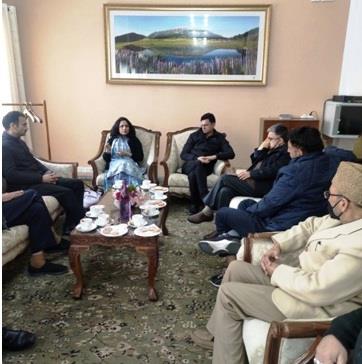 Srinagar: The leading Kashmir based exporters had a meeting with the Additional Director General, (ADG) Foreign Trade (FT) Ministry of Commerce, Govt. of India, Smt. Suman Sharma at SKICC and discussed varied issues of their interest.

The exporters put forth solid suggestions before the visiting dignitary for arresting the decline of exports from Kashmir Valley. Exporters of the Valley strongly registered the withdrawal of the MEIS scheme that has been replaced with RODTEP, where rates have not be notified till date and the valley based exporters are facing huge problems on this account.

The valley based exporters reiterated the problem they are facing on account of GST that has been imposed on various handicraft items exported from Kashmir. The visiting dignitary was also of the opinion that the Handicrafts Sector being 75% labour oriented should have a friendly GST pattern. The exporters also demanded a separate ITC (HS) code for Pashmina.

In addition to the demand of funding under TIES scheme, the visiting dignitary was made aware about the problems being faced by the exporters of Kashmir in view of infrastructural deficiencies in the office of DGFT at Srinagar. The visiting dignitary assured to look at the demands on priority with regard to the deputing of suitable human resource power to the office of DGFT, Srinagar.

With regard to the Districts being promoted as export hubs, the exporters demanded a proactive participation of DGFT to infuse more funding in this particular component.

Strongly demanding that no value cap should be placed on Pashmina Shawls or other value added handicraft items under ROSCTL scheme, the exporters demanded that the minimum reimbursement in this particular component is killing the Pashmina and Paper-Machie Industry wherein at latter case the products should be valued on unit basis as compared to the weight basis.

The exporters also demanded that the testing lab of the CDI Srinagar should be designated as the testing lab for Pashmina shawls for valley based exporters as compared to the present practice whereby the testing is done at Dehradoon to which the visiting dignitary assured to take the matter with the concerned on priority. The exporters also demanded that shipment bills from customs to DGFT should be minimized. The exporters demanded air , freight , transport subsidy and organizing of physical fairs by DGFT as emergency measures to increase the quantum of exports from Kashmir.

The meeting was arranged by the Directorate of Handicrafts and Handloom, Kashmir.