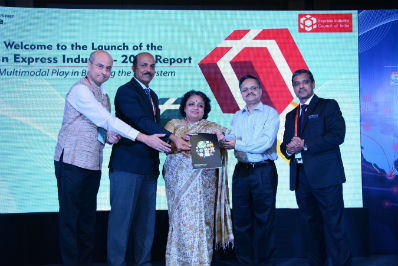 Delhi: As one of the fastest growing markets globally, the Indian express industry is expected to grow at a CAGR of 17% and reach INR 48,000 cr. by 2023, according to an independent study led by Deloitte. The report titled ‘Indian Express Industry-2018: A multi-modal play in building the ecosystem’ forecasts this growth as being primarily driven by the growth of cross-border and domestic e-commerce in India, and significant demand from the small and medium B2B segment.

Minister for Commerce & Industry and Civil Aviation, Shri. Suresh Prabhu launched the report earlier in the day. Commenting on the report, he said, “The express industry is a key enabler for the growth of India’s trade and economy. Factors such as ease-of-logistics will increasingly play a critical role in attracting investments into the country, which will in turn support the development of several industries involved in manufacturing. We are pleased to see the industry sustaining its growth momentum, and also acting as a major contributor to employment generation within the country.”
The report highlighted that with the rise of new age business models and SMEs, and economy on the path of revival, there has been a considerable focus on improving India’s logistics performance. It also indicated that the industry grew at 15% CAGR over the past five years and is estimated to be worth INR 22,000 cr. in FY17.

In FY17, the express industry contributed ~INR 3,000 cr. in Service Tax and INR 2,000 cr. in Custom Duties besides direct taxes around employment creation, thereby contributing to the national exchequer.

The study attributes e-retail to be a major growth driver for the industry with over 13 lakh shipments from this sector shipped daily. It contributed INR 5,000 cr. in FY17 to the Indian express industry. The distinct nature of this sector has also led to several new trends in the industry thereby challenging traditional express operations. These include the adoption of alternate delivery methods, customer centric deliveries, shift from air express to surface express, increase in regional movements, adoption of technology and expansion to remote locations.

Speaking about the industry outlook, Mr. Vijay Kumar, Chief Operating Officer, EICI, said, “The express logistics landscape is undergoing a huge transformation due to the need for time bound delivery services to complement the growth of trade. As a key enabler of trade, the industry will also support and benefit from the e-retail boom in India. We also anticipate the express industry to provide a significant boost to India’s employment base to increase to 26 lakhs. Regulatory and policy changes, and infrastructure enhancements will also give a much needed fillip to the industry, which will positively impact the growth of other sectors.”

Save the Children Calls for Equality for Street Children