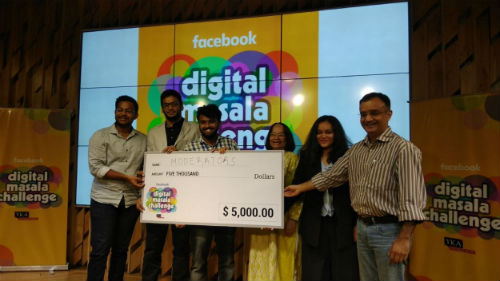 Mumbai: With an aim to confront the global issue of divisiveness and polarization, Facebook, in partnership with Youth Ki Awaaz, India’s largest user-generated content platform, organized a two-day hackathon titled ‘Digital Masala Challenge’ in Mumbai. The Digital Masala Challenge has been receiving a phenomenal response on its Facebook page and received an active participation in the recent hackathons that were held in Guwahati and Jammu. The Digital Masala Challenge held at Lower Parel on 17th and 18th November brought together enthusiastic entrepreneurs, techies, social media campaigners and film-makers and crowned, “ Team Moderators of Final Year Engineering Students from Aligarh Muslim University, Aligarh as the winners.
In an event hosted by popular VJ and actor Cyrus Sahukar, the teams had 10 minutes each to pitch their ideas to a panel of expert judges. On the jury panel were Mr. Shivnath Thukral, Public Policy Director, Facebook India and South Asia; Ms. Ruhee Neog, Director, Institute of Peace and Conflict Studies; and Ms. Sushobha Barve, Ashoka Fellow and Program Director of Centre for Dialogue and Reconciliation. The teams were judged basis their idea’s potential of real-world impact, and sustainability, scalability and uniqueness.
Commenting on the success of the Digital Masala Campaign, Mr. Anshul Tewari, Founder and Editor-in-Chief , Youth Ki Awaaz, said, “We are experiencing a tumultuous period of global divisiveness, which is driving violent extremism and hate, we believe that Digital Masala Challenge is the key step to counter this. It brings me great joy to see the enthusiasm amongst today’s youth to support this initiative and witness some of the most innovative and impactful ideas presented by participants. We congratulate all the teams who were part of the hackathon, and we are looking forward to connect with many more like minded individuals in our upcoming hackathons in Kolkata and Kochi”.
Winning team member Hamzah Khan said- We are delighted to be a part of such a big challenge that was a practical project to curb extremism on social media.. We are happy that our hard work from the past 24-30 hours was commended by all and it can be scaled up.
The Team Moderators of Final Year Engineering Students from Aligarh Muslim University, Aligarh team received a reward of $5000 (INR 3.25 lakh) which will help them to execute their idea smoothly.