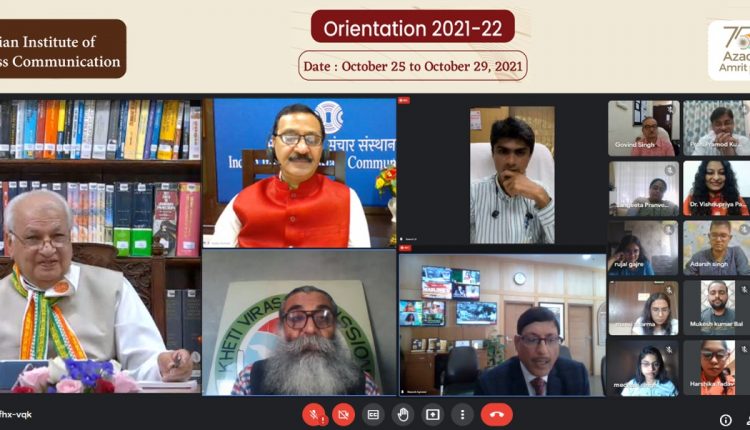 ‘Fact’ and ‘Truth’ are important for Media: Arif Mohammad Khan

New Delhi: “It is the duty of every journalist to inform the society, maintain social harmony and work for the welfare of the people. To stay in the field of journalism for a long time, it is very important to have ‘fact’ and ‘truth’ along with patience, diligence and talent.” This view was expressed by the Governor of Kerala, Shri Arif Mohammad Khan, on the second day of the Orientation Programme for session 2021-22 of the Indian Institute of Mass Communication (IIMC) on Tuesday. On this occasion, the Director General of IIMC, Prof. Sanjay Dwivedi, Additional Director General Shri Ashish Goyal, Convener of the program and Dean (Academic) Prof. Govind Singh, faculty members and students of all the centers of IIMC were present.

The freedom of the press, according to Shri Arif Mohammad Khan, is a fundamental aspect of democracy. It must be looked after, yet with freedom comes responsibility. As a result, we must all take responsibility. Dharma is the perfect code of conduct and behaviour for completing any task. In today’s ever-changing climate, journalists face numerous problems. As a result, journalists should carry out their responsibilities with vigour while maintaining the set values.

According to the Governor, news or views, which can spread hatred and despair in the society, should be avoided. The interest and development of the society is the main aim of journalism and journalists have to work in this direction. He said that you should evaluate yourself as to what effect your news will have on the society. Keeping in mind the dignity of the fourth pillar of democracy, journalists should present facts in the society.

Mr. Khan said that the information revolution has broadened and enriched the field of journalism. Instead of falling into the trap of negative journalism, the students of media should learn healthy journalism and inform the people about the good work that is being done in the society.

New India will be built with the power of youth: Prof. Sanjay Dwivedi

Earlier, during the first session of the programme, while expressing his views on the topic ‘Youth Power and India’; Director General of IIMC, Prof. Sanjay Dwivedi said that today a new India is being built with the power of the youth of the country. A new India, in which there are opportunities for the youth and there is also a whole sky to fly. A massive effort is being seen today to make youth power a nation power.

Prof. Dwivedi said that today’s India is full of youth power. Opening of 26 thousand new startups can be the dream of any country in the world. Behind this lies the power of the youth of India Today, the country’s youth are creating innovative apps to make their lives easier while also assisting their fellow citizens.

Agriculture is not a business, it is a religion: Umendra Dutt

On this occasion, Executive Director, Kheti Virasat Mission, Punjab, Mr. Umendra Dutt, while speaking on the topic ‘India’s Krishi Sanskriti’, said that agriculture in India is not a business but a religion. With the changing times, agriculture has become a market today. In the name of modernization, the use of pesticides in agriculture has started. He said that agriculture does not mean market. Farming is what provides food and food in turn gives good health.

Paralympic medal winner, Mr. Suhas Yathiraj, shared the secret of his victory during the program’s final session. He said that no one can move you forward until they try for themselves. During the struggle, you will experience both triumph and defeat, but you must face both with confidence, he said. He added that life does not always provide opportunities; one must seek them out. Life is full of ups and downs, but one should never give up, he said.

Mr. Mayank Agarwal, Director General of Doordarshan, spoke to the students about the ‘Government Information System’ on this occasion. Mr. Aggarwal stated that in any service industry, how you perform your duties is important. You’ll need to examine your work and develop a strategy for this. He stated that today’s Doordarshan is distinct from other channels in that its primary goal is to disseminate information and raise awareness, rather than to increase TRP.