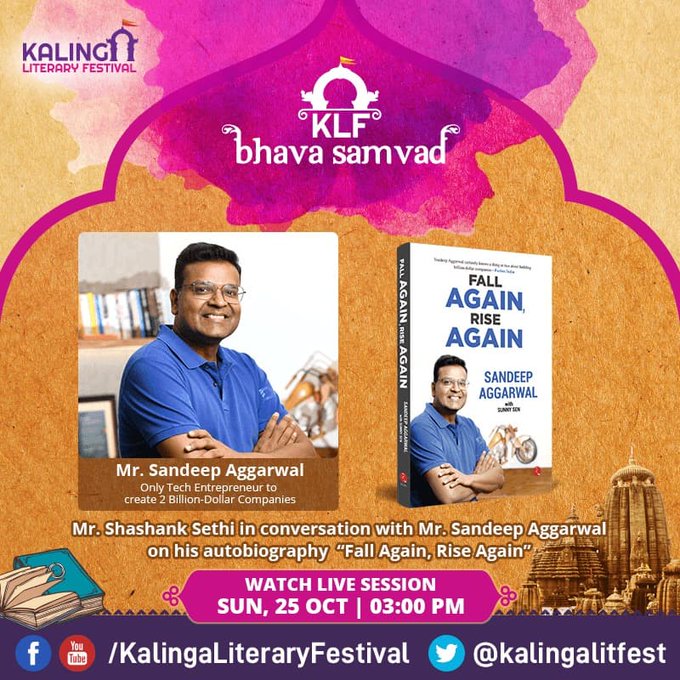 New Delhi: ‘Fall again, rise again’ are words that sum up the entire life of the founder of two billion-dollar companies and shopclues. Sandeep Aggarwal’s story is that of a middle-class boy who could not speak English for much of his school life but dreamt to make it big someday. A young professional who went to the US and couldn’t get a job but eventually became a sought-after Wall Street analyst. He achieved more success than he could imagine but gave up everything to return to India to become an entrepreneur. An entrepreneur who built one of India’s very few unicorns but was ousted from his own company. A dreamer who saw his dreams crushed by Charges of insider trading in the US but rose like a Phoenix to create yet another company—droom.

While KLF Bhava Samvad hosted him, he said, “Failures and rejections are not just a part and parcel for entrepreneurial career, but also life” being in conversation with Shashank Sethi.

“I’ve had lot of successes and failures. It’s important because it teaches anything that goes down Must come up. Investment Banking was something I always aspired. I was able to make 1 Million USD as my last compensation. How many times before you die you realize you can create a Category leader. It was shopclues first , not returning to India. I just got lucky to open it in my home country India. I could contribute in Nation building.
The department of justice and security exchange commision have inducted me for insider trading as a wall street analyst for an incident in July 2009,” he said further.

A true believer of deeds, Sandeep told that ‘The only thing which is inseparable from you and which defines you is your Karma.’

He narrated, “Whether I were paid or not, I kept working for Shopclues. We took our time to unleash the initial vision. I came up with 52 ideas which could create billion dollar company. Each of those ideas was needed by consumer internet in India. I became more methodical with my second venture. Digital Economy in India since 2010 is largest man made Modern history social transformation, wealth creation and ability to make larger than life opportunity.”

Worlding With Oysters bridges the gap between art and science