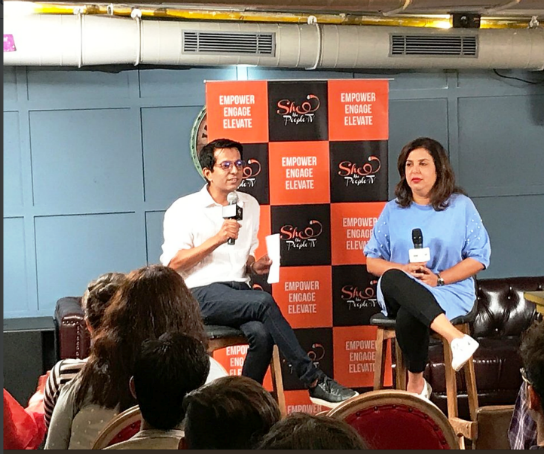 New Delhi: SheThePeople.TV, a digital storytelling platform for women best known for curating and conceptualizing ground breaking efforts, now goes one step further and presents Filmistani – a talk with the female stars of the film industry and discovering the feminist inside them. And, the first guest at the show was the famous Bollywood director and choreographer Farah Khan on board in conversation with the show host Rohit Khilnani (Entertainment Journalist) at Mumbai.

The team at Filmistani believes in the immense power that the entertainment industry beholds in bringing women equality and changing the overall dialogue and discourse. Getting on to the same, the conversation begins as the renowned entertainment journalist Rohit Khilnani, brings some of the industry favorites to the Filmistani spotlight and discuss their journeys’ ups and downs with them.

Speaking on the SheThePeople.TV’s new show Filmistani India’s well known Director Farah Khan says if women want to take on men in the film industry, they need to make big budget films. “We need females in most departments of film making, she says. And the trend has begun. Since the time of ‘Main Hoon Na’, there are now four times as many female directors than there were back then,” she says. Insisting that there are not enough women making popular movies, she said it was time they took on men on their own turf.

Farah Khan further added, “The year 2017 has been a different year for the film industry. People don’t want to see the same type of films anymore And with the prevalence of the online world, and platforms like Netflix, the best production, the best acting and so on becomes available at the consumer’s fingertips. That means that the industry has to raise their standard. I have doubts on whether a masala movie with just gags will work in a big way anymore. Consumers want fresh stories.”

Founder of SheThePeople.TV Shaili Chopra said, “Entertainment can play a big role in sending out the right signal on gender fairness. We have launched this effort with someone as fantastic as Farah Khan, who is candid in her views and says it as it is. When an influencer like her talks about women and the film industry, I believe we are asking for change.”

Teachers’ professional development is crucial for the growth of education sector

iednewsdesk Jan 22, 2022
In classic UC San Diego fashion, an overheard conversation at a campus coffee cart has turned into an…