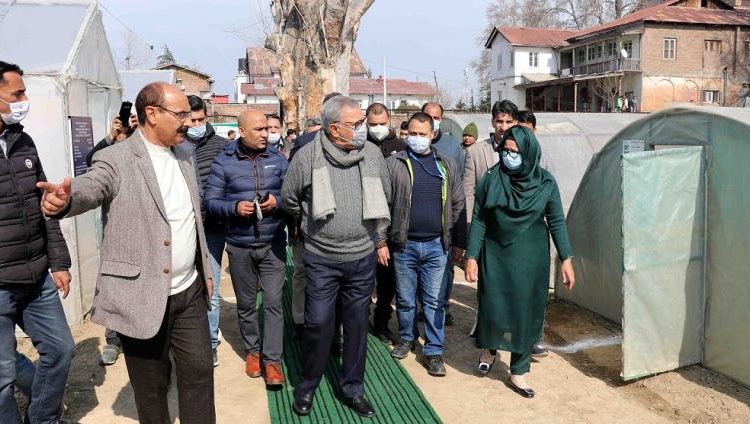 Advisor highlighted bee keeping as lucrative rural Agro- Horticulture based activity that fits well in the integrated agriculture system as an allied vocation to increase the income of all farmers . He said that there is a tremendous scope of beekeeping in the UT of J&K due to plethora of flora available here.

Advisor stressed upon the officers to motivate youth towards establishment of viable bee keeping units as the sector has good potential to generate income not only in honey production but also the production of by- products like bees wax, propolis, bee venom and royal jelly. He laid stress on the need to organize more of such sensitization programs on apiculture as the sector plays a crucial role in providing large scale opportunities at comparatively lower capital costs assuring more equitable distribution of income and wealth.

During the program, Director Agriculture, Kashmir, Chowdhary Mohammad Iqbal, said that the department has prioritized upliftment of apiculture sector and designed and drafted Detailed Project Reports for promotion of high altitude honey in J&K under Honey Mission. He gave details regarding the colonies saying that at present we have around 70 thousand colonies in Kashmir division against the requirement of 7 lakh colonies.

Joint Director Apiculture and Mushrooms gave a detailed power point presentation on the subject and said that the apiculture cultivation is a way forward to double farmer’s income by 2022.

Joint Director Agriculture (Extension) said that the department is all set to provide training and awareness to the officers of the department and farmers to acquaint them with latest technological intervention.

Besides a large gathering of apiculture growers, officers of the department and other concerned attended the training program.

Advisor directed for conducting individual household survey of all the inhabitants of district Srinagar associated with the kitchen gardening so that the gap between the total demand and supply of vegetable seedling and other inputs could be regulated.

Director Agriculture informed that the household survey has already been started by the department on war footing basis, but again the department through print and electronic media shall coordinate with the inhabitants of district Srinagar to register themselves with Chief Agriculture Officer Srinagar or Seed Production Officer Lalmandi so that the exact quantity of vegetable seedlings is grown under controlled conditions and distributed among the beneficiaries well in time.

Director Agriculture also informed that regarding Kharief preparedness the department is in readiness for distribution of 60 lakh seedling of different vegetables, out of which, 50 lakh seedlings will be distributed from Kitchen Garden Lalmandi and rest from respective districts.

Siberian Federal University: FinOlymp-2022 participants to be selected at SibFU

iednewsdesk Apr 29, 2022
The registration of participants in the qualifying round of the FinOlymp-2022 International Financial Security…

RUDN: Students of RUDN Engineering Academy are the winners of the…

RUDN: RUDN ecologists: gypsum is ineffective for protecting soils from…