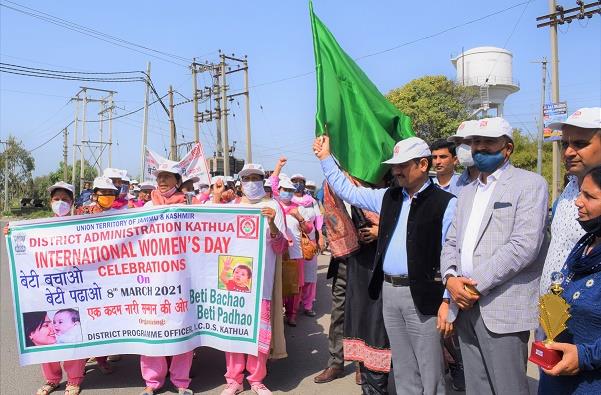 At Samba: District Administration Samba felicitated the birth of girl children here under the Beti Bachao Beti Padhao campaign in its mega awareness programmme, and to observe the International Women’s day.

During the programme, parents of around 200 baby girls were felicitated by District Administration by presenting the Baby kits to the first newborn girl and fixed Deposit passbooks to the second girl in the family.

Meanwhile, ICDS Project Vijaypur also organized one day Awareness Program to mark the International Women’s Day, 2021 “Lets Choose to Challenge”. The Program was organized under the overall supervision of CDPO Vijaypur, Er. Madhur Anand. He welcomed the Frontline Field Workers and presented a flower to each women participant.

Later, series of activities like Slogan Writing Competition, Mehandi Competition, and song competition were organized involving the Front Line Workers of the Department.

Poshan Pakhwada, which is a fortnight long event under the National Nutrition Mission ( Rashtriya Poshan Abhiyan) for addressing the malnutrition and imbibing cleanliness among the workers was also launched.

Thrust was laid upon the Panch Sutras of the POSHAN by CDPO Vijaypur.

At KATHUA: On the culmination of week long campaign on ‘Beti Bachao Beti Padhao’, District Administration Kathua organized a rally to spread awareness among the people about the need and significance of educating the girl child besides highlighting adverse impact of decline in sex ratio.

The rally was flagged off by Deputy Commissioner Kathua Om Prakash from Shaheed Bhagat Singh Park and passed through several areas of the town. The rally comprising Anganwadi workers and Anganwadi Helpers raised slogans like ‘save the girl child’ holding placards with the messages on decreasing sex ratio and importance of girls in the society.

The speakers from legal fraternity while addressing the participants educated them about the various legal and constitutional rights of the women.

Special cultural programmes were also presented by the girl children from Kishtwar on the occasion.

District Administration in collaboration with District Level Centre for Women(MSK), Childline Doda and other Allied departments organised a program on the this year theme ” Choose To Challenge”.

The event was attended by women from all walks of life and kids. Additional Deputy Commissioner, Kishori Lal Sharma presided over the function as the Chief Guest, while Sonali Sagar Doifode was the Special Guest on the occasion.

Later, several women were who have excelled in the field of social activism, education, art were felicitated.

Meanwhile, International Women’s Day was celebrated at Bhaderwah by the Social Welfare Department, in which a large number of women, Anganwadi Worker and Helpers participated.

Municipal Councilor, Savita Sharma was the chief guest on the occasion, while Nasreen Jalani Child Development Project Officer Bhaderwah was the guest of the honour.

The participants discussed women centric issues and shared their experiences and achievements. .

The programme started with a Symposium on Empowerment of Women followed by a culture programmes in which girls from various schools presented song and dance items and skits.

Speaking on the occasion, the DC said that parents should treat girls and boys at par and give them a sense of ownership, security and access to quality education.

Emphasizing upon providing a level playing field to girls, the DC said that district administration will soon provide books and study material in schools so that students can start preparations for appearing in various competitive exams.

In his address, the SSP gave a brief resume about initiatives taken by the police to provide a congenial atmosphere for the womenfolk. He also informed that the police department has planned to establish a women police station at Ramban, which will be operated by lady police officers and officials to provide justice and sense of security to womenfolk.

AT UDHAMPUR: Like in other parts of the country, International Women’s Day was also celebrated in Udhampur district witnessing a series of programmes.

Additional District Development Commissioner, Ashok Kumar flagged off a rally organized by ICDS and Social Welfare Department in collaboration with other allied departments.

An impressive function was organized at ICDS Office Complex featuring cultural items and skits on this year theme “Choose to Challenge” by beneficiaries and AWWs of ICDS Department.

The Dogri Dance performed by baby Ananta Vasudev and Baby Samridhi were the main attraction of the programme.

A theme based scintillating cultural programme was also presented by Artists of Department of Information & Public Relations to sensitize the audience about the various schemes through folk songs.

AT RAJOURI: District Administration Rajouri on Monday celebrated the International Women day on the theme, “Choose the Challenge” & Women in leadership, achieving an equal future in a COVID-19 world.”

On the occasion, a grand programme was organised at SVS College where Deputy Commissioner Rajouri, Rajesh K Shavan was the chief guest.

A number of speakers spoke at the event and highlighted the significance of the day and discussed the ways as to how women can be made equal partners in the decision-making process especially with regard to policy making. The speakers also raised awareness about the importance of fresh water and talked about the ways how this precious gift of nature can be conserved.

The students also presented cultural item based on women empowerment which were highly appreciated by the audience present on the occasions and Kawali was also presented by a Student of International HSS Rajouri.

In his address, the Deputy Commissioner threw light on the importance and contribution of the women in the society and said that women are nowhere less than the boys in any manner and have shown their caliber in all the fields of life.

A book ‘Mehv e- Hairat’ penned Near Qureshi, Student of Himalayn Degree College was also released by the Deputy Commissioner.