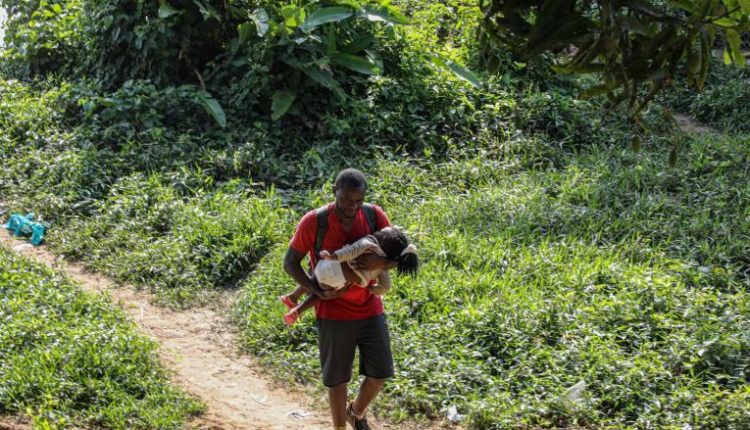 Panama City: The number of children migrating up north through the dangerous Darien rainforest between Colombia and Panama has increased more than fifteen-fold in the last four years, UNICEF reported today after a two-day field visit to the Darien border by Jean Gough, Regional Director for Latin America and the Caribbean.

In addition, the proportion of children among the migrant population through this jungle has dramatically risen in the past few years. Children accounted for only 2 per cent of all these migrants in 2017; but for more than 25 per cent in 2020.

“I’ve seen women step out of the jungle carrying their babies in their arms after walking for more than seven days without water, food or any kind of protection,” affirmed Jean Gough. “These families are pushing their own limits and putting their lives in danger, often without realizing how much of a risk they are taking. Those who manage to eventually cross this perilous border are physically and mentally devastated. Their humanitarian needs are immediate and immense. At the same time, we should not forget the harsh situation of communities they reach, which are overwhelmed and often do not have basic services. For example, I visited a community of 400 people called Bajo Chiquito, which is currently hosting about 1,400 migrants.”

In the past 4 years, over 46,500 migrants have crossed the Darien jungle out of which 6,240 are children. With mobility restrictions and the closure of borders to curb the spread of COVID-19, this irregular migration flow paused, but did not fully stop.

The Darien jungle, between Colombia and Panama, is one of the most dangerous routes in the world due to the mountainous terrain, wildlife and insects, as well as the presence of criminal organizations. Migrants who are trapped inside are exposed to multiple threats, including death. In this context, women, especially pregnant women, along with children and adolescents are the most vulnerable. At the end of last year, the first cases of sexual violence against children have been reported.

Those migrating through the Darien Gap are not only single men looking for a job, but entire families fleeing violence and poverty from over 50 countries all over the world, with the dream to find better opportunities up north.

The socioeconomic impacts of the COVID-19 pandemic, coupled with violence, unemployment, racism, xenophobia, and extreme weather events are likely to increase poverty and push more families to migrate up north in the next months.

With support from donors, primarily the United States’ Bureau of Population, Refugees, and Migration (BPRM), UNICEF provides lifesaving aid to children and families on the move at the border, especially with nutrition, psychosocial support, water, hygiene and sanitation services and child protection in coordination with the International Organization for Migration (IOM), the UN Refugee Agency (UNHCR) and the Panamanian National Frontier Service (SENAFRONT).

From October 2019 to February 2021, 15,649 people, including 3,367 child migrants, refugees and members of host communities, have received humanitarian assistance from UNICEF and its partner, including the International Federation of the Red Cross, the Panamanian Red Cross and RET Americas.

UNICEF is scaling up its relief programmes on the ground to respond to the growing needs of children and families while in transit through Panama. The number of migrant children and families in the Darien Gap is expected to continue to increase during the dry season in the next weeks and months.

“Migration of women and children across the Darien Gap is not a new phenomenon; however, this route heading to the US remains as widely unknown as dangerous and this migration flow tends to increase,” said Jean Gough. “Unless the international community provides more humanitarian support to address the root causes of migration, more and more families with children are likely to be left with no other option but to venture on this perilous journey through the Darien Gap in search of a better life.”

UNICEF is also calling on governments to address the root causes that lead families to migrate as well as promote their integration into host communities. The rights of children on the move need to be protected at all times during all phases of their migration journey.