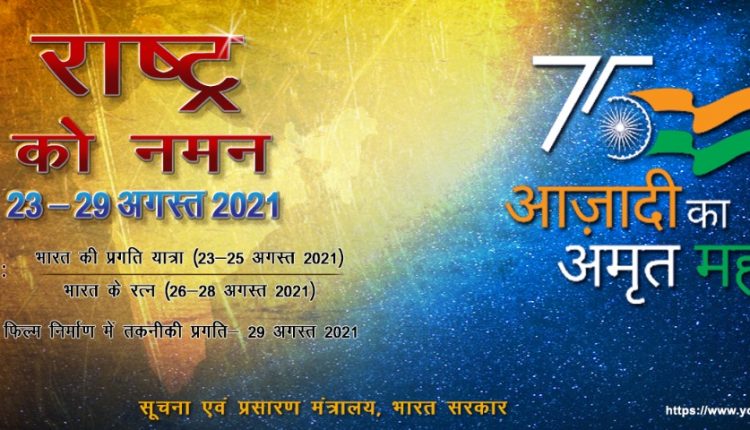 New Delhi: A variety of events are being organized by the Ministry of Information and Broadcasting to celebrate Azadi Ka Amrit Mahotsav and Films Division has chipped in with a week-long programme, Salute to the Nation from 23 to 29 August, 2021 wherein film festivals and a seminar will be organized on virtual platforms. The online film festivals, A Voyage of Progress and Ratnas of India will be followed by a webinar on technological advancements in film making over the years.
A Voyage of Progress, showcasing documentary films on important projects, industries and iconic institutions in India will held from August 23 to 25, 2021 and the package include success stories of Bhakra Nangal, Hirakud and Nagarjuna Sagar dams, institutions like National Physical Laboratory, Bhabha Atomic Research Centre, TIFR, BHEL, Shipping and Oil industry, DRDO and space projects like Chandrayan & PSLV.
In the second part of Salute to the Nation, some of the iconic personalities in the field of science, art and culture bestowed with the highest civilian honour, Bharat Ratna, will be remembered by screening their biopics. Ratnas of India will be screened from August 26 to 28, 2021 and include biographical of Prof. C. V. Raman, Dr. M Vishveshwaraya, Dr. A. P. J. Abdul Kalam, Prof. C. N. R. Rao, Satyajit Ray, M.S. Subbulakshmi, Pt. Ravi Shankar, Ustad Bismillah Khan and Pt. Bhimsen Joshi.
The week-long event will be concluded with a webinar on technological advancements in film making over the years on 29th August, 2021in which senior film makers and technicians of Films Division will interact with media students from across the country after a session of knowledge-sharing.
The films will be streamed free of charges on https://filmsdivision.org/ ‘Documentary of the Week’ and on https://www.youtube.com/user/FilmsDivision from August 23 to 28, 2021 and the webinar on Google Meet on 29th August, by invitation.