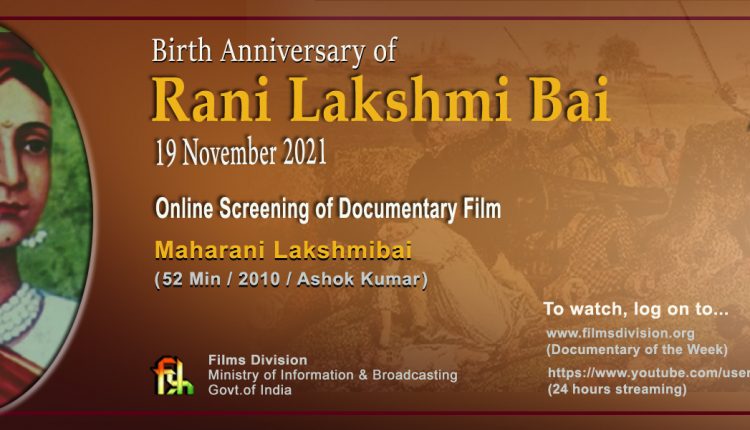 New Delhi: Films Division remembers the indomitable courage of warrior queen, Jhasi ki Rani Lakshmi Bai who was one of the leading figures of the Rebellion of 1857 against the British Raj. On her birth anniversary, Films Division is paying tribute to her by showcasing a biopic, Maharani Lakshmi Bai (52 Mins / English / 2010/Ashok Kumar) on its Website and YouTube channel on 19th November 2021. This special screening will be a part of ‘Azadi Ka Amrit Mahotsav’ celebration by the Ministry of Information & Broadcasting, Government of India.
The biopic depicts the true spirit of Lakshmi Bai’s nationalism and her fearless courage. Her famous dialogue addressed to British Raj “I shall not part with my Jhansi” is etched into India’s memory. This film is a tribute to the “Durga” of the freedom struggle of 1857, dedicated to the impeccable valour and courage of the Queen.

The film will be streamed on https://filmsdivision.org/ Documentary of the Week and https://www.youtube.com/user/FilmsDivision for 24 hours on 19th November, 2021.
. Citizens can also avail these services by downloading ‘OdishaOne’, the one-stop App for all citizen-centric Govt services, at the ease of their homes.

Delhi tops the list of winners in the IndiaSkills 2021 Regional Competition, Northern Zone