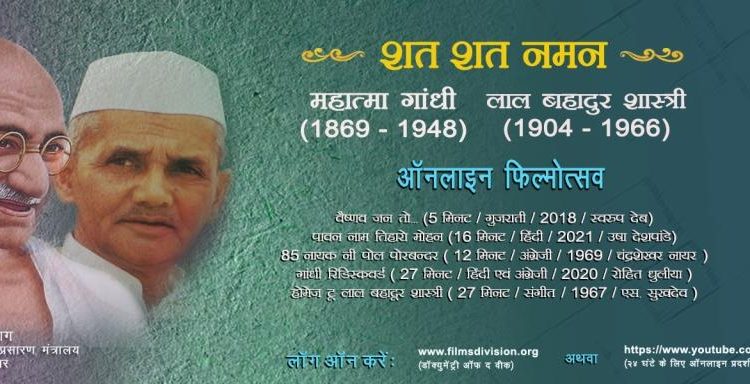 New Delhi: Films Division is organizing a 2-days online film festival Shat Shat Naman, to pay tribute to Father of the Nation, Mahatma Gandhi and great freedom fighter and former Prime Minister, Lal Bahadur Shastri. Documentaries highlighting the life and inspirational works of both the leaders will be screened on 2nd and 3rd October, 2021 on Films Division website and YouTube Channel. The festival is a part of the Azadi Ka Amrit Mahotsav celebrations by Films Division under the aegis of the Ministry of Information & Broadcasting, Government of India.

Films being streamed in the Shat Shat Naman festival are:
Vaishnav Jan To…(5 min/Swarup Dev) – a beautiful animation film which is a pictorial reflection of famous bhajan of Mahatma Gandhi “Vaishnav Jan To…”.
Pawan Naam Tiharo Mohan (16 Min/Usha Deshpande) – film is on a composition on Mahatma Gandhi from the book of Padma Bhushan Dr. Srikrishna Narayan Ratanjankar, distinguished scholar-vocalist, set to music and sung by Pt. Suhas Vyas.
85 Nayak Ni Pol Porbander (12 Min/CS Nair) –the film depicts the historical background of the city of Porbandar and concentrates on the house of the ancestors of Mahatma Gandhi. The birth of the Mahatma and the various memories connected with the infant days of the Mahatma and other subsequent vital associations with the house are depicted in this film.
Gandhi Rediscovered (27Min/Rohit Dhuliya) – film discusses the scope of Swadeshi. A very significant instrument of social change, in Gandhi’s view, was the precept and practice of Swadeshi which implied self-reliance and self-sufficiency at the level of the individual, the village and the nation.
Homage to Lal Bahadur Shastri (27Min/S. Sukhdev) – this film is a homage to the great Statesman and former Prime Minister, Lal Bahadur Shastri trying to portray a humane document of an extraordinary human being. It has been made with only music, yet presents an lasting impression of towering personality of Shastri.

The films are being streamed on https://filmsdivision.org/ and click @ “Documentary of the Week” and https://www.youtube.com/user/FilmsDivision on 2nd and 3rd October, 2021.