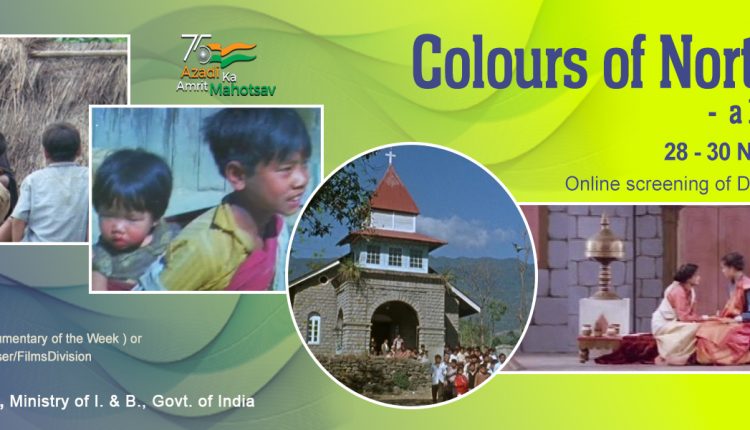 Mumbai: Films Division will be celebrating the rich culture and heritage along with the contribution of notable tribal leaders and freedom fighters from North East India region through a special package of films “Colours of North East” as a part of  ‘Azadi ka Amrit Mahotsav’ celebration by the Ministry of Information & Broadcasting, Government of India. The package will feature films ranging from notable personalities to cultural, social, literary political history of the region. “Colours of North East” will be screened on Films Division website and YouTube channel on 28 -30th November 2021.

Films that will be showcased are :

Lokopriya Gopinath Bordoloi (Eng/1994/20Min/R. Vasudevan & Subhankar Ghosh), the package begins with a biographical narration of freedom fighter from Assam, Dr. Gopinath Bordoloi. The film narrates his life from his birth, education and his sacrifices to achieve freedom for the country.

Raja of Nongkhlaw (Eng/2005/38MIn/Gautam Choudhury) -this film is on visionary leader from Meghalaya, U Tirot Singh and his fight for freedom.

India’s Struggle for Freedom : Tales of Courage (Hindi/ 1986/20Min/Aribam Syam Sharma) -this film narrates the history of Manipur’s contribution to this struggle right from 1857, when Manipur was ruled by Maharahja Chandra Kirti Singh.

Rajarshi Bhagyachandra of Manipur (Eng/2007/56Min/Aribam Syam Sharma) –this film unfolds Bhagyachandra’s life as a Meitei warrior & king, a blessed vaishnav and religious reformer, a spiritual visionary and artiste par excellence. His creation of the Manipuri Raas stands as the most sublime of all the classical dances of India.

Satras & Namghars of Assam ( Eng /2000/20min/Bhupen Hazarika) The film throws light on the role of the Satra & Namghar in the evolution of genesis of Assamese identity. The Satra and Naamghars were set up by Shankarcharya, with religious aspect it became a part and parcel of Assamese social and cultural life.

His Majesty, The Ahoms (Eng/2011/52min/Tapan Kumar Gogai) -Ahoms have shaped the history and identity of the Assamese community and also the geography of it state, Assam.

Tribute to Arunachal (Hindi/1993/39Min/Chandrashekhar Nayar) -Arunachal Pradesh is one of the strategically important states of India located in the northeastern region. This film highlights the diverse cultural heritage of the state through its people and places.

Manipur (Eng/1972/ 15Min/Benoy Roy) -the film presents fascinating life of the people of Manipur both in the valley and hill areas and their colorful festivals and dances.

Heart of Darkness (Eng/2011/52Min/Chandra Narayan Barua ) -the Veil of mystery covering the caves of Meghalays is lifted to reveal a fascinating world of sculpted wonders.

Archaeology and Monuments of Tripura (Eng/2012/54Min/Shyamal Ghosh) -this film is about the documentation of temples and other archaeological remains, monuments and antiquities found from Tripura.

My Land, My People (Eng/1969/28Min/Arun Chaudhuri) -The film is a record of the land and the people of Nagaland and shows in detail the development and culture of the region.

Sikkim (Eng/1975/11Min/J. S. Bandekar) -tucked away in the North-Eastern Himalayas, Sikkim has traditionally been looked upon as abode of spiritual tranquility. This film narrates the political history of Sikkim right from 1890.

This special package will be streamed on https://filmsdivision.org/ Documentary of the Week and https://www.youtube.com/user/FilmsDivision for 3 days from 28th to 30th November, 2021.

Fortis Hospitals, Bangalore conducts “Guardians of Health” HR Conclave to reinvent the role of HR in the new normal