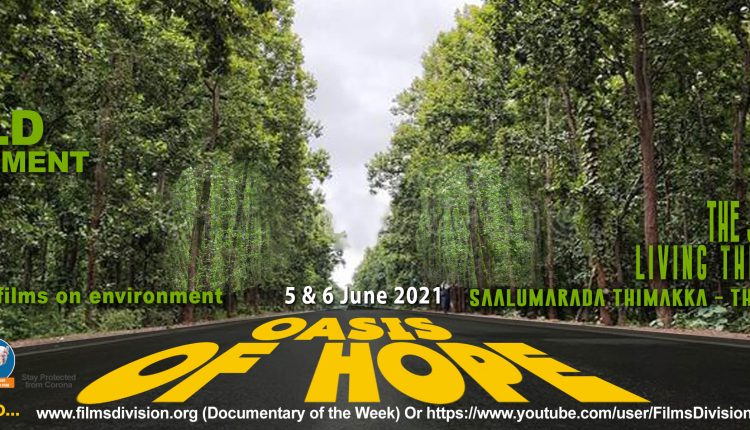 New Delhi: The World Environment Day is being observed on 5th June, 2021 with the theme of ecosystem restoration, which aims to prevent, halt and reverse the degradation of ecosystems on every continent and in every ocean. REIMAGINE. RECREATE. RESTORE are the key words for the celebrations this year. Contributing with the same spirit, Films Division is presenting Oasis of Hope, an online festival of films on environment on 5th and 6th June, 2021 to mark the important occasion.

The 2-day festival will consist of films that give strong message of reviving environment and reimagining the nature’s co-existence by suggesting various ways to restore the inseparable relationship of human being and nature. The streaming will be done on Films Division website and on You Tube channel.

Embassy Group renews its MoU with the Government of…

The films in the special ‘green package’ are – The Jungle Man Loiya (21 Mins / Farha Khatun), a film that highlights the story of LoiyaNgamba, a nature lover from small hilly area in Manipur. For six years, Loiya stayed alone on the hill, building a dense forest, almost from scratch and created a green space for the local communities. It’s a story of reorienting man’s relationship with nature and building a culture of peaceful coexistence, Living the Natural Way (76min. / Sanjib Parasar), a story about Mishing tribes living on a small Brahmaputra island and how changing climate and environment has shattered and challenged their traditional way of living, Saalumarada Thimakka – The Green Crusader (43 Mins / P. Rajendran) which features a self taught environmentalist of Karnataka, having no formal education. Saalumarada Thimakka is considered as a role model for environmentalists all over the world having planted hundreds of roadside trees, Climate Change (14 Mins / P. Ellappan), film on the perils of global warming and climate change. My Son Neo (15 Mins / Eng / S. Shanmuganathan), a film that poignantly portrays how a five year old boy grows up amidst natural environment, loving all living beings and setting an example for others and Plastic World (7 Mins / Music / Paushali Ganguli), an animation films that portrays the vast and arid dystopian landscape of the future, covered in plastic waste and also alerts against the hazardous effects of plastic on human life and environment.

The festival is being screened on www.filmsdivision.org/“Documentary of the Week” and https://www.youtube.com/user/FilmsDivision throughout the day on 5th and 6th June, 2021.