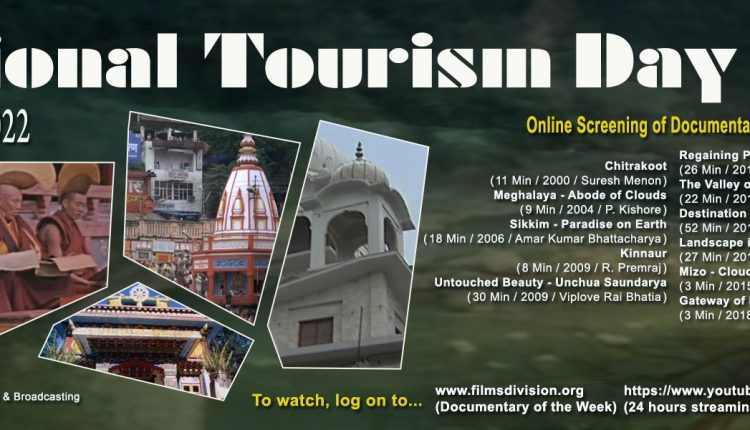 Films Division to celebrate National Tourism Day with special screenings on 25th January, 2022 on its website and YouTube Channel.

Marking the National Tourism Day on 25th January 2022, under the aegis of “Azadi Ka Amrit Mahotsav”, Films Division is presenting a film festival, exploring the splendor of select tourist destinations in India. The online film festival will showcase eleven films unveiling the beauty of states like Meghalaya, Sikkim, Jammu & Kashmir along with experiencing the vibrant Valley of Flowers in Uttarakhand, famous tourist circuits of Bihar and many more. The special package will be screened on 25th January 2022 at FD website and YouTube Channel.

Chitrakoot (2000/Suresh Menon) – deeply connected to folklores of the Indian epic Ramayana, Chitakoot and its historical, spiritual and mythological legacy is revisited through this film.

Meghalaya – Abode of Clouds (2004/P. Kishore) – a state with many vibes, this film straightly takes us to the heart of Meghalaya. From wind-swept undulating terrain to beautiful rivers, a largely unexplored geographical region is presented in a marvelous manner.

Sikkim – Paradise on Earth (2006/   AK Bhattacharya) – a documentary about the mesmerizing tour of the scenic Sikkim and its destinations.

Kinnaur (2009/R. Premraj) – a film on Kinnaur in Himachal Pradesh known as Dev Bhumi -the land of the Gods, vividly representing the confluence of faith and beauty.

Untouched Beauty (2009/Viplove Rai Bhatia) – as the title suggests, Untouched Beauty is a film to promote tourism in North Eastern Region of India, which is naturally gifted region.

Regaining Paradise (2010/Shahzad Rasool) – the film is about revival of tourism in Kashmir.

The Valley of Flowers (2010/K.S. Shridhar) – the film is on the most enigmatic part of Uttarakhand, situated in the higher regions of the Himalayan range. The Valley of Flowers is a home to more than 600 species of flora, most of which have medicinal properties and some which are endangered.

Destination Bihar – Where Faith Calls (2011/Pradip Sinha) -a documentary on persons, places and the faiths based on tourist places of Bodhgaya, Nalanda, Gaya, Rajgiri, Pawapuri and Patna city in Bihar.

Landscape in The Mist: Pre – history Revisited (2012/Anasua Roy Choudhury) – a film travelogue of the two scenic  places – Cherrapunji and Mawsynram of Meghalaya.

Mizo : Cloud Nine (2015/Atish Nandy) – an invitation to Mizoram, the abode of peace.

Gateway of India – The Pride of Mumbai (2018/P. Rajendran) – this short film traces the historical and political journey of the iconic ‘Gateway of India’, a popular tourist destination of Mumbai.

The toursim package will be streamed on https://filmsdivision.org/ “Documentary of the Week” and https://www.youtube.com/user/FilmsDivision on 25th January, 2022, for 24 hours. Please find attached press release and e-flyer, and share the event.