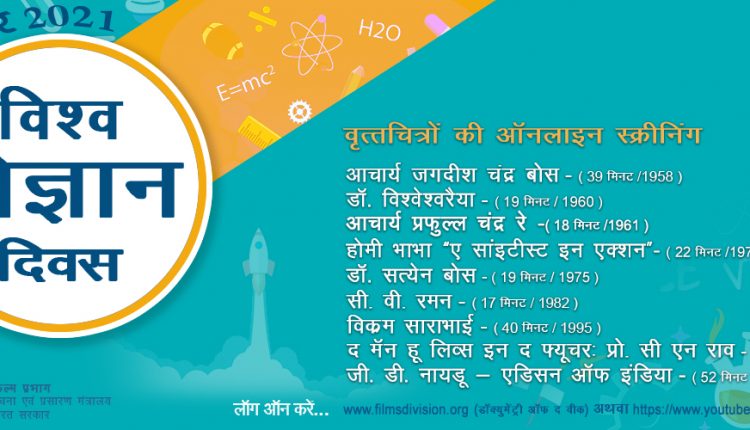 New Delhi: To mark the International Science Day 2021, Films Division will screen a package of nine documentaries highlighting the contribution of Indian scientists. The films will be streamed on 10th November, 2021 on Films Division website and YouTube Channel.

The films being showcased are Acharya Jagadish Chandra Bose (39 Min /1958) – bringing to the screen the life of the great Botanist from childhood to his pioneering efforts to prove the existence of life in plants, Dr. Visvesvaraya (19 Min / 1960) –a  film which tells the humble origins of Dr. M. Visveswaraya,  and  many memorable engineering feats, Acharya Prafulla Chandra Ray (18 Min/1961) – a rich biography of one of the eminent scientists, describing his brilliant academic career, his life as a college professor and as a pioneer in the  establishment of industries, Homi Bhabha – A Scientist in Action (22 Min /  1973) –  a short film one of the greatest nuclear scientists of India,  who was an institution in himself, Dr. Satyen Bose (19 Min/1975) –  on noted Indian mathematician and physicist, specialising in theoretical physics who is best known for his collaboration with Albert Einstein, C.V. Raman (17 Min / 1982) – a biopic of the Nobel laureate Physicist, Vikram Sarabhai (40 Min / 1995) – on the life and work of  the well known physicist and astronomer who is hailed as Father of Indian Space programme, The Man Who Lives in The Future : Prof. C. N. R. Rao  (29 Min/2012) –a film which traces the life and times of Prof CNR Rao, National Research Professor and Chair of the Scientific Advisory Council to the Prime Minister of India,  and G.D. Naidu – the Edison of India  (52 Min  /  2018) – a well-researched biopic  of the great inventor- engineer.

The package of inspirational biographies will be streamed on www.filmsdivision.org/DocumentaryoftheWeek and https://www.youtube.com/user/FilmsDivision on 10th November, 2021 for 24 hours. Please find attached press release and e-flyer, and share the event.

Efforts to drive low carbon development pathways in industry sector are critical for achieving the goals of the Paris Agreement: Bhupender Yadav