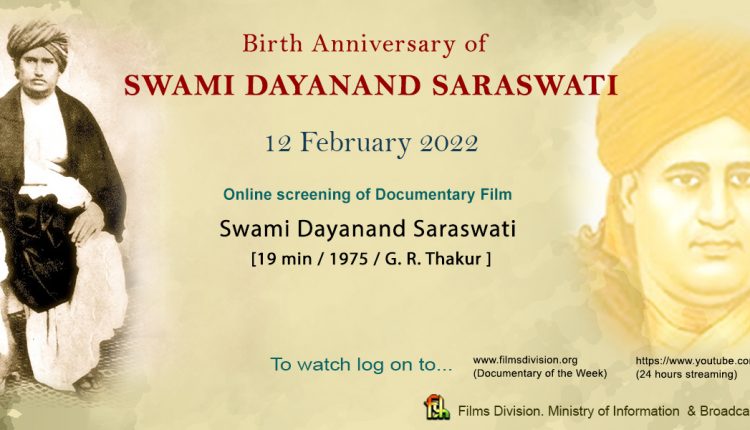 Films Division to pay tribute to Maharshi Dayanand Saraswati on his 198th birth anniversary on 12th February, 2022 on its website and YouTube Channel

New Delhi: Film Division is paying tribute to Maharshi Dayanand Saraswati, the great social reformer, spiritual genius and founder of Arya Samaj, on 12th February 2022. To mark 198th birth anniversary of the saint, Films Division will screen a biopic highlighting his life and works, on its website and YouTube channel on 12th February 2022. This screening is a part of ‘Azadi Ka Amrit Mahotsav’ celebration by the Ministry of Information & Broadcasting, Government of India.

The film Swami Dayanand Saraswati (1975/G.R. Thakur) is an autobiographical work of the genius. The child Mool Shankar, later to be known as Swami Dayanand Saraswati, was born in the town of Tankara in Gujarat in 1824. In his boyhood, Mool Shankar set out in search of knowledge. He became an ascetic. For fifteen years, he wandered throughout the country, subsisting on charity. Eventually he reached Mathura where he found an old guru, Swami Virajanand Saraswati, who was even more implacable in his condemnation of all superstitions. Based upon his beliefs that God was formless, endless and unchanging and that he was the cause of all Knowledge and of all that is known through Knowledge, Swami Dayanand Saraswati founded the Arya Samaj in April, 1875 in Bombay. Soon, the message of Arya Samaj spread across the country.