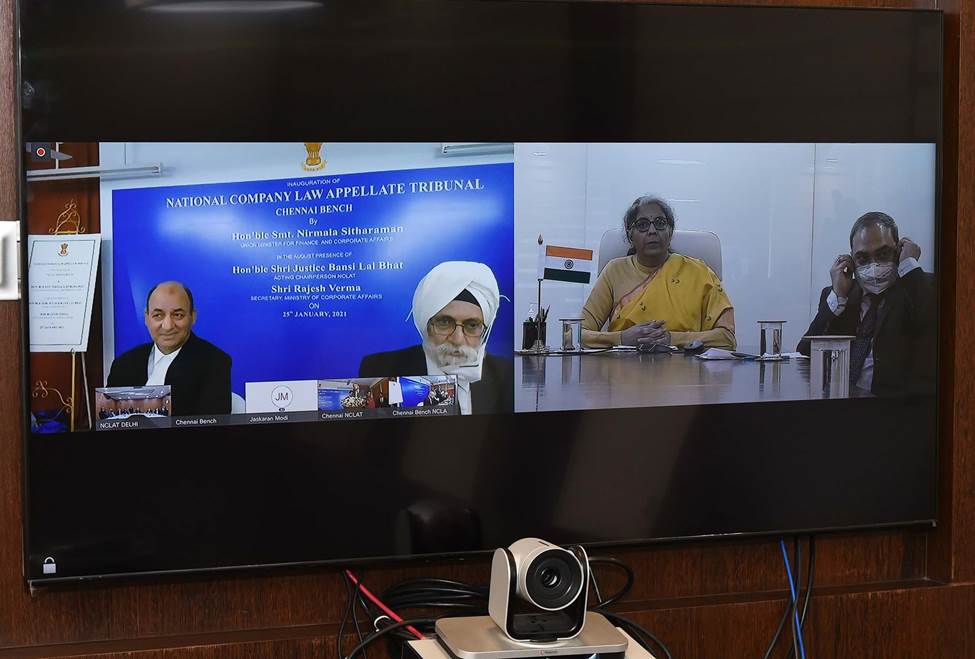 The Chennai Bench of NCLAT shall have jurisdiction to hear the Appeals arising out of the orders passed by the benches of NCLT having jurisdiction of Karnataka, Tamil Nadu, Kerala, Andhra Pradesh, Lakshwadeep and Puducherry. Two Members of NCLAT, New Delhi, Hon’ble Shri. Balvinder Singh, Member (Technical) and Hon’ble. Shri. Justice Venugopal M. have taken charge of the newly constituted Chennai Bench of the NCLAT.

Hon’ble Shri. Justice Bansi Lal Bhat welcomed Finance Minister Smt. Nirmala Sitharaman and expressed his gratitude for inaugurating the Chennai Bench of the NCLAT. He also expressed his gratitude to Hon’ble Prime Minister Shri Narendra Modi who has very aptly underscored the role of the Insolvency and Bankruptcy Code, 2016 in providing freedom of exit to insolvent entities. He stated that the Central Government has demonstrated a proactive approach by bringing successive amendments to the Code and that the Government is taking all steps to strengthen the NCLT in terms of number of Benches and number of courts at heavily loaded benches.

Five new Benches of NCLT have been announced at Jaipur, Cuttack, Kochi, Indore and Amaravati, bringing the total number of Benches to 16 (including the Principal Bench). The NCLAT now functions at a strength of 5 courts, 4 at the Principal Bench in New Delhi and the 5th at NCLAT, Chennai.

The Finance Minister stated that the Union Government’s decision to set up a bench of the NCLAT at Chennai will give a major relief to the companies and litigants in Southern States of India, who faced great difficulty in travelling to Delhi for work pertaining to filing and arguing of appeals in the NCLAT. This will reduce the pendency of cases, shorten the period of process and shall result in speedier disposal of the cases. Smt. Sitahraman further stated that advent of the Insolvency and Bankruptcy Code (IBC), 2016 has benefited the economy in several ways.

The Finance Minister stated that along with the Hon’ble Supreme Court as the apex forum, the NCLAT and the NCLTs have done a commendable job in ironing out the issues and difficulties faced in implementing the new law. On the one hand, the judiciary and quasi-judicial Tribunals have been working tirelessly, at the same time, she stated that it was heartening to note that these institutions have kept themselves technologically up to date. While the COVID-19 Pandemic brought physical hearings to a halt, the NCLTs and the NCLAT continued to function on video mode. At the NCLAT even during the period of lockdown, nearly 69% of cases were adjudicated during this time between March 2020 and December, 2020; 985 cases were filed and 681 cases were heard and disposed of.

The Finance Minister observed that a large part of the Insolvency Law’s evolution can be accredited to the development of jurisprudence which happens under the very able guidance of our judicial and quasi-judicial institutions. Before the NCLAT, out of approximate 5,600 cases filed as of December 2020, approximately 3,800 cases pertaining to IBC matters have been handled. Also, out of the total matters filed before the NCLAT, 4200 matters have been disposed of, indicating a disposal rate of 75%. She stated that the Government is committed to ensuring continued efforts to ensure speedy and cost-effective delivery of justice and ensure ease of doing business in India.